The home side hadn't won in their previous 15 matches but they tore the Darts to shreds at Priory Lane. Jamie Coyle and Adam Flanagan's side remain three points outside the National League South top seven with just two matches remaining.

Already down to the bare bones, Dartford were further depleted by the loss of loan striker Darren McQueen to an injury sustained in training with parent club Sutton during the week. Charlie Sheringham was still out and Andy Pugh only fit enough for the bench so on-loan Maidstone winger Andre Coker led the Darts attack supported by Joe Healy on just his fourth appearance for the club. There was also a change in goal, with Bailey Vose dropped and Louis Wells drafted in having joined from Margate just before the transfer deadline. Elliot Bradbrook, Mark Onyemah and Billy Crook were among the other Dartford players ruled out by injuries but even allowing for all of the absentees, there was no excusing Dartford's abysmal performance on the south coast. They lost their battles all over the pitch, gave the ball away cheaply and looked wide open every time the Sports broke forward.

Joint Boss Adam Flanagan apologised to the Dartford supporters who travelled to watch Saturday's humiliation at Eastbourne, describing their 6-0 defeat in Sussex as one of the worst Darts performances he's been involved in. He said "A few players showed they're not good enough to be at the club. They haven't got the heart or the passion or the desire to want to win games and want to achieve good things and that was evident today out on the pitch. We've got a few players who have already got their minds elsewhere or the season ending and that's a crying shame to everyone who travelled down. There was no quality to Dartford's play at all but the lack of fight once they'd fallen behind was a far greater worry. We've got seven players who have disappeared in the last two weeks through injury or other various bits and pieces and six of those might have started. When you've got 50% of your team not playing, it's easy to find an excuse but there is no excuse for today."

He added "Being truthful, we're feeling a little bit sorry for ourselves because we're thinking if we've got everyone fit maybe the outcome of these games is a little bit different. But our final position in the league this year was never going to be dictated by today and the next two games, it was dictated over the last six or seven and we haven't been good enough. I don't think we deserve to be in the play-offs." 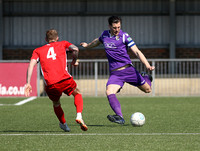 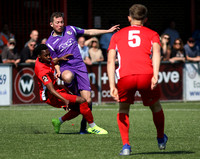 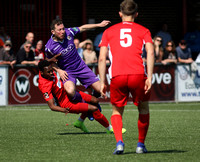 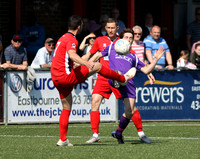 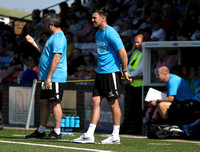