Created 9-Feb-20
99 photos
8 February 2020. Dartford lose 1-2. Luke Wanadio 6', Danilo Orsi-Dadomo 25', Ryan Hill 42' on calm, bright, sunny and quite mild day, without a hint of Storm Ciara imminently on the way for Sunday! Dartford scored on 6', then lost the lead by 2 goals to 1 and couldn't make headway in the second half.

6' Luke Wanadio heads home a cross from Darren McQueen. Several more chances in the first half. Bill Crook, Tyrique Hyde and Giovanni McGregor in midfield.
26' Goal for Hampton by Orsi-Dadomo.
32' Elliot Romain booked by the referee, but what for?
45' late tackle on Sanchez Ming, more than just a yellow card deserved by Niko Muir.
45' Wadah Ahmidi (8) booked for a late tackle on Darren McQueen.
58' Charlie Wassmer booked for a tackle on Luke Wanadio, setting the tone for a scrappy second half.
67' Romain sent off for a second yellow card, but we wonder what that was for? Some strange decisions by the officials today. 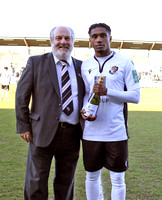 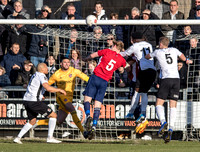 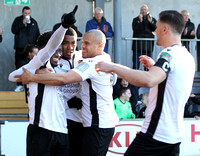 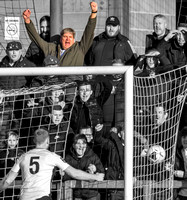