Created 3-Mar-19
83 photos
2 March 2019. Dulwich Hamlet win 2:0.
Jamie Mascoll fired Gavin Rose’s side ahead in the 27th minute and Decarrey Sheriff wrapped up the win with a last-minute second on front of 2,779 fans in Dulwich.
The result moves Hamlet up to 16th, eight points above the relegation zone.
Dulwich Hamlet had brought in 3 new signings, Aryan Tajbakhsh, Luke Wanadio and Jamie Mascoll to boost the Hamlet survival bid. Luke Wanadio played for Dartford last season. All the Hamlet players were all over Dartford like a no-so-cheap suit (well, we ARE in Dulwich, Dah-leeing).

Referee David Spain dished out a few yellow cards, including one late in the game to Lee Noble which was clearly a non-foul (pics in gallery). A case of three blind mice?

Dulwich have at least three outdoor bars selling beer (and not cheaply) which gave the spectators a genteel Twickenham appearance. Not something I'd seen before in NLS. The ground is adjacent to a massive Sainsburys and I heard that fans were queuing for 40 minutes AFTER the game started to enter via the SOLE turnstile. Seriously, Dulwich? 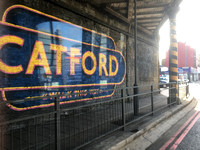 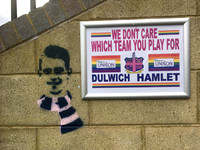 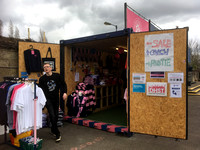 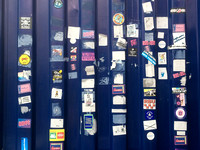 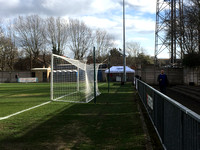