Got to Havant in good time. Started peeing with rain. I haven’t been to Havant (no pun intended) for a while. What a crummie ground. Just had time to put my gear in the shelter of the covered stand behind the goal and chat with some of the other Dartford people there. First thing I had a temperature check, and got my amber lanyard. Then I asked where the loos were. Unisex near that entrance) were the most filthy, disgusting bogs, looked like they’d never been cleaned. The male/female at the other end (where I put my Gear) were grotty toilets, and no running water in the taps! Just as well I had my own hand sanitiser. There were a few sanitiser dispensers around the main stand. All my gear had waterproof covers but everything got wet (me included) even though I tried to keep under the roof cover when I could. Havant’s snapper had a big lens and was up in the gods of the main stand snapping from there. There was a younger chap there too.

The team run onto the pitch separately, no line up, no handshakes. They go straight to start position. Then, on the coin toss, change ends! Havant scored in the first half, and also had a man sent off with a straight red card. Dartford pulled back an equaliser in the second half and then a penalty shot.
Havant took a 14th minute lead through Jonah Ayunga after getting on the end of a Danny Kedwell flick and finding the net.
Sanchez Ming dragged an effort wide for the Darts on the half-hour mark and the visitors were given a boost just before the break when Josh Taylor was dismissed for the Hawks. Kedwell was one of three players replaced by home boss Paul Doswell at the break but 11 minutes after the restart Steve King’s side were level.

The Darts took the lead from the penalty spot and it was McQueen who converted, to score his second of the match. Worner denied Elliott Romain a third with 20 minutes left while at the other end Ayunga put a shot narrowly over the bar.

Strangely there were no celebration by our team after the final whistle. It was all rather drained of energy. Just shook hands and went in out of the unrelenting rain. 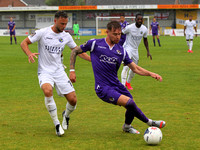 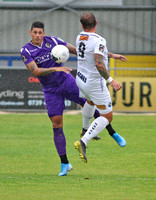