Dartford returned to winning ways, as Samir Carruthers scored a superb second-half brace against his former team at Vauxhall Road. After such a tight forty-five minutes, the game (well, the Darts) exploded into life just two minutes after the restart. A delightful move along the left-flank, ended up at the feet of Samir Carruthers. He drove into the box before unleashing a beautiful strike which curled beyond ex-Dartford goalkeeper, Craig King, and into the top corner. Samir Carruthers was then booked for a late challenge (55), before the Darts were awarded a free-kick for a foul on Adam Lovatt on the edge of the box. Up stepped Carruthers to send the ball straight over the defensive wall and into the back of the net (64).

Overall, this wasn’t the prettiest of games to watch. But, two special goals from Dartford’s number four set them on the way to an important victory, which has ended that three-game losing run. And, the result sees Alan Dowson’s side climb back into the top ten of the National League South table.
Report by Chris Palmer 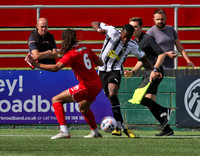 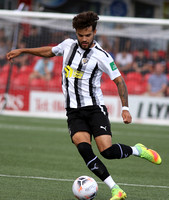