Dartford’s form at Bericote Powerhouse Princes Park continued, as they beat Concord Rangers in a dominant display in front of 1,009 supporters. With the visitors on an unbeaten run in four league games themselves, this fixture had the potential to be a difficult contest. However, the Darts dominated in large quantities throughout this game and were a tad unfortunate to go in level at the break. Eventual Man of The Match, Samir Carruthers, was in superb form once again as he set about helping to control the midfield alongside Keiran Murtagh and Jordan Wynter. Yet it was his teammate, Davide Rodari, who was unlucky not to open the scoring after receiving the ball from Charlie Sheringham. His fifth-minute strike stinging the hands of goalkeeper Mitch Beeney at the near post instead. Despite controlling proceedings though, the Darts just couldn’t turn their dominance into goals at first. Samir Carruthers dragged a shot just wide after 12 minutes, before Connor Essam’s drive from distance after good work from Carruthers and Keiran Murtagh flew straight into the grateful arms of Beeney (14).

The Beach Boys grew into the game soon after and both sides proceeded to cancel each other out in the middle of the park. That was until the 27th minute… After a great move down their left-flank, space opened up for Carruthers inside the box whereby the talismanic midfielder wrong-footed Beeney and gave his side a deserved lead with a neat finish. As half-time approached, Carruthers should have doubled Dartford’s lead after linking up well with Rodari. The latter created a brilliant opportunity for Dartford’s number four, but his strike flew straight into Beeney’s arms unfortunately (45). However the visitors, who’d lost James Blanchfield to an injury in the 18th minute, all of a sudden woke up and created their first meaningful opportunity as we entered five additional minutes. First to come was Ben Williamson’s acrobatic strike from Tosan Popo’s long throw, which crashed off the crossbar. Then, as the Darts failed to clear their lines, referee Mr Steven Hughes offered Concord a lifeline for a possible handball offense during the next attacking sequence. Up-stepped Mo Bettamer to convert the spot-kick and send his side in level at the break.

A relatively slow start to the second forty-five eventually saw the hosts re-take the lead after Charlie Sheringham and Davide Rodari combined well to create an opening for Pierre Fonkeu. And the latter didn’t disappoint, as he turned inside the box to fire an excellent strike into the bottom corner (54). Alan Dowson’s side began to turn the screw again as they dominated proceedings. As they forced desperate defending from the Beach Boys’ backline, a few corners were awarded and it wasn’t long before they came close once again… Sheringham getting onto the end of Carruthers’ set-piece with a firm header only for it to fly narrowly wide of Beeney’s upright in the 68th minute. Connor Essam would suffer almost exactly the same miss from another corner six minutes later, before the visitors gifted Dartford the three points after 76 minutes. A communication breakdown between Beeney and his captain Aron Pollock saw the defender put the ball in his own net. With his side comfortably in front, Alan Dowson made all three substitutions within seven minutes as the returning Luke Allen replaced Davide Rodari (80), Alex Wall replaced Charlie Sheringham (82), and Luke Coulson came on for Man of The Match Samir Carruthers (87). There was still time for the visitors to create a possible second and consolation goal, but skipper Tom Bonner ensured that the score remained as it was during additional time at the end.

The result sees the Darts return to top spot of the National League South table, as their excellent run of just one defeat in fourteen league games continues.
Report by Chris Palmer 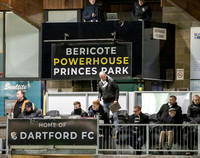 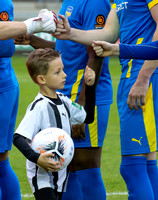 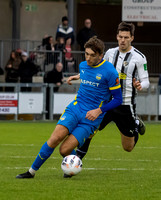 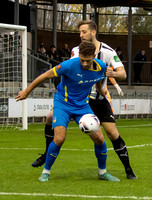 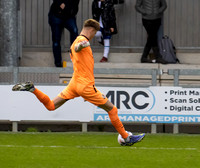 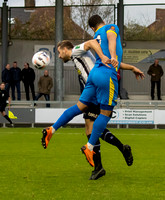 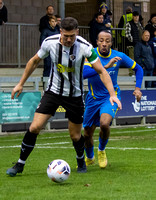 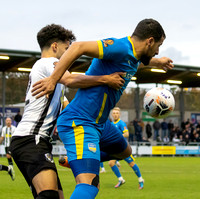 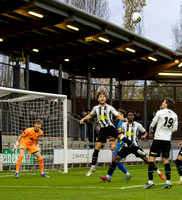