Dartford’s return to action after an enforced ten-day break saw them travel to Essex, where they faced a struggling Braintree Town at The Dunmow Group Stadium.
And it was a Jack Jebb special deep into stoppage time which earned the Darts a valuable point, after having trailed 2-0 with eight minutes remaining.

With The Iron sitting second from bottom of the National League South table having registered just two wins in sixteen games, Dartford would surely have arrived expecting to continue a good run which has seen them lose just once in the previous five games. However, despite their perilous league position, the hosts do have a good record against the visitors, which proved to be the case once again.
The Darts started brightly, with new signing Kalvin Kalala proving to be a handful throughout the opening exchanges. The French attacking midfielder, who signed from Entente Feignies Aulnoye FC after moving there from Torquay United, terrorised the Braintree defence and came close to opening his goal account as early as the seventh minute. Unfortunately, his effort from the edge of the box took a deflection and flew over Tommy Dixon-Hodge’s crossbar. Jake Robinson then forced a corner after using excellent skill to control an equally excellent Connor Essam pass, before Kalala was the recipient of some brilliant combination play between Robinson and Ade Azeez. The former sent the ball out towards the debutant, who struck a sweet effort towards goal, only to see Dixon-Hodge make an outstanding save (16).
But the hosts showed that they were also an attacking threat when Stefan Ilic managed to breach Tom Bonner’s defence, only to fire wide of the target in the thirteenth minute. Tyrique Hyde broke into the box at the other end after nineteen minutes, but couldn’t beat Dixon-Hodge with his low drive before proceedings turned a bit quiet from then onwards, as the game became rather scrappy. Matthew Johnson received a yellow card for a poor challenge on Kalala (35), before referee Oliver Mackey issued Kieran Murtagh with a yellow for a poor challenge on Luke Pennell (41) On the stroke of half-time, Hyde appeared to have been tripped in the box, but Mr Mackey wasn’t having any of it, to the irritation of the travelling supporters.

The second forty-five saw the hosts explode into life and take the lead within five minutes. And it was Gabriel Piorkowski who scored the goal with a fine effort from distance. From then on, the Iron looked in control and could have doubled their lead seconds later when a Nathan Cooper strike was somehow kept out by the Dartford defence. The Darts began trying to get back into the game after a quiet period by their standards, and came close in the 65th minute when Kalala sent in a delightful cross, only to see Robinson head the ball wide of Dixon-Hodge’s upright. By then, manager Steve King had seen enough and brought on reinforcements in the shape of Dan Roberts (on for Ade Azeez) and Jack Jebb (on for Kieran Murtagh). As Dartford pressed for an equaliser, Braintree doubled their lead via a well-taken Gio Crichlow goal in the 72nd minute. The visitors looked dead and buried, but were thrown a lifeline when an Iron defender miss-timed his challenge in his own penalty area, leaving Mr Mackey no choice but to award the penalty. Up stepped Jake Robinson to smash the ball home and halve the deficit with eight minutes to play.
The Darts’ tails were up and they forced Braintree back as they searched for an unlikely equaliser. With two minutes remaining, Jebb let fly with an excellent long-range drive, which forced Dixon-Hodge into a good save. Then, with seven extra minutes added, a diagonal ball from Jordan Wynter wreaked havoc in the Iron’s defence and the foul was committed on the edge of their box. Midfielder Jebb stepped up, and sent a delicious thunderbolt beyond the hapless Dixon-Hodge to draw the Darts level at 2-2! The Dartford faithful breathed a sigh of relief when Mr Mackey blew the final whistle, as the Darts had achieved the seemingly impossible by snatching a valuable point from the jaws of what looked like being a certain defeat. Such are the lows and highs of the beautiful game! 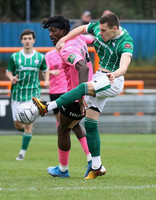 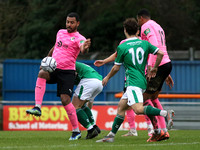