Created 20-Jul-20
37 photos
Dartford win 0:3 (goals Sheringham 47', 56', Wanadio 85').
With the Vanarama National League deciding the remainder of the regular season to be concluded on a points-per-game basis, Dartford’s hard work was rewarded with a place in the playoff positions. The resurgence under Steve King saw the Darts approaching the closing stages of the season in superb form, before the COVID-19 pandemic put a halt to proceedings. However, with the points-per-game system coming into effect, that hard work was reflected with a sixth-place finish.

That final league position meant that Steve King’s side had the task of travelling to Arbour Park, where they faced a difficult Slough Town. With the Rebels having completed the double over the visitors during the regular season, Tom Bonner and Co arrived in Berkshire fully aware of the challenge ahead, especially as the game was to be played behind closed doors. And that awareness resulted in a professional performance from the visitors, as a Charlie Sheringham double contributed towards a 3-0 victory in a superb second half display.

After a slow start, Slough Town seemed to dominate proceedings in terms of possession, but couldn’t breach the stubborn Dartford defence. In fact, it took until the nineteenth minute for the first real effort on either goal to present itself, an effort which the Rebels failed to take advantage of. Matty Lench sent in a cross, which found his teammate Josh Jackman, but his resulting header failed to worry AJ Sesay in the Dartford goal, as it looped onto the roof of the net. The hosts were at it again three minutes later, however, like before, another free header flew over the crossbar. This time, Ryan Bird was the guilty player, as he couldn’t get any direction from Lench’s corner. As play on the pitch appeared tense and tight, with neither side giving an inch, it took until the 36th minute for the Darts to register their first attempt on the Slough goal. That effort came from a free-kick, which eventually fell to Tyrique Hyde, who fired his shot over the bar. Slough responded immediately with an impressive attack of their own, but Sesay saved well from a dangerous Lee Togwell ball, thwarting Warren Harris in the process! With half-time approaching, Sheringham had the ball in the back of the net for the visitors, but was deemed to be offside. He wasn’t left to rue that opportunity for too long however, because with just 65 seconds on the clock in the second half, the big striker gave his side the lead. The move was started by the excellent Noor Husin in midfield. The ball was threaded out wide to Jordan Wynter on the right flank, who then sent a dangerous ball across the face of goal. The ball reached Sheringham, who finished smartly to score his seventh goal of the season.

The hosts were stunned and just couldn’t get going, as Dartford controlled the ball well and were dominant both with possession and without. Frustrations boiled over in the 52nd minute, when both Hyde and Darren McQueen were flattened by crunching tackles in quick succession. With the referee awarding a free kick in a dangerous position, the responsibility fell to midfielder Jack Jebb. His curling effort was deflected behind for a corner, which Slough were then able to clear. Four minutes later saw Sheringham bury his second of the afternoon after another excellent ball from Wynter. With the Slough defence unable to deal with the right-back’s forward runs, Wynter ventured forward more frequently and was rewarded for his efforts once again. His driving cross into the danger area found Elliott Romain, who saw his effort deflected onto the upright. Fortunately, the loose ball rebounded straight to Sheringam, who slotted the ball home. The goal came just after some top defending from Tom Bonner had halted a Rebel attack!

With the game seemingly out of reach, Slough were desperately trying to get back into proceedings. Huffing and puffing, they lost possession in the midfield and should have been made to pay, as the visitors broke forward with some fantastic football in the 64th minute. Unfortunately, the corner won for their efforts came to nothing, and four minutes later Sesay was forced into making a fine save to preserve his clean sheet. A few minutes after the necessary drinks interval, Romain managed to out-muscle George Wells, as he powered forward. Reaching the edge of the box, he struck a sweet effort, which flew over the bar to the relief of Jack Turner. A minute later (73rd) saw the referee award the hosts a free kick in a dangerous position. However, Wells sent the ball past the wrong side of the post. Meanwhile, with time running out fast, Steve King made his first substitutions of the game, with Lee Noble replacing Husin (79) and Luke Wanadio replacing McQueen (82). The Dartford defence held strong, cancelling out another Slough attack in the 83rd minute, before the tie was put to bed with five minutes of normal time remaining. Wanadio played a neat one-two with Jebb, which resulted in Jebb playing him through on the left-hand side. Wanadio collected the ball, cut inside and fired the ball past the hapless Turner to score his fifth goal of the season and his side’s third of the second half. Dartford should have made it four towards the end, when Ky Marsh-Brown (on for Romain in the 87th minute) collected the ball and drove forward in excellent fashion. He laid off a beautiful ball for Hyde, but the midfielder could only direct the ball over Turner’s crossbar. That didn’t deter Hyde, however, as he continued to assist his teammates to frustrate their opponents during the remaining minutes. Slough were left chasing shadows, as Dartford professionally played down the clock to seal a thoroughly deserved victory, together with a trip to Havant & Waterlooville in the next round.

Steve King’s side now head for Havant and Waterlooville for next weekend’s Semi Final, and Dartford co-chairman Steve Irving gives his thoughts on the Darts return to competitive action:

“Sunday July 19th had taken an eternity to arrive – one hundred and twenty-seven days to be precise since we’d played Chelmsford City off the park. It’s the longest break from football that I, along with many others, had gone without watching The Darts play in nearly half a century. Playing behind closed doors doesn’t really allow for the pre-match hype and buzz that a Play Off Quarter Final might normally provide. Being one of the lucky ten Darts “people” to be allowed to attend the game, we were greeted by Slough officials with temperature checkers, masks and gloves – sadly necessary at the moment but wearing latex gloves at a football match – it really was weird! The socially distanced amber zone in the main stand was our viewing point for the day, and along with my old friends and fellow directors, Dave Skinner, Norman Grimes and Tony Burman, we were joined by half a dozen members of our supporters association committee. I have to admit that the game itself had the feel of a pre-season friendly rather than a Promotion Play-Off Quarter Final. Gradually, the game itself came to life with the home side bossing the first 20 minutes but we came in to our own in the second period of the first half. We were delighted of course when the boys hit the ground running at the start of the second half, with Charlie scoring twice in an eight-minute period. Luke then made the game safe five minutes from the end of the game shortly after coming on as a sub. A 3-0 thoroughly deserved win, sees us away again next weekend – this time heading down the A3 to face Havant and Waterlooville in the Semi-final with the winners of that playing either Weymouth or Dorking Wanderers in the Final for a place in the National League in the new season. It really was a strange atmosphere in which limited very celebration was possible at the ground after the game which meant a quick return to Princes Park was the order of the day for a celebratory drink (or two) with the fans that had watched the game on the streaming service.” 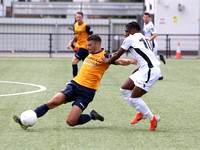 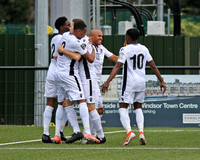 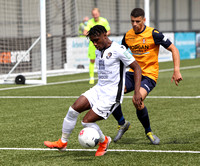