Birthday boy, Jack Jebb’s first-half strike helped Dartford’s unbeaten run remain intact, as they came from behind to earn a point against Tonbridge Angels at Bericote Powerhouse Princes Park. A poor first-half by Dartford’s recent standards saw them fall behind in the twenty-fourth minute, after a slow-starting, physical Angels side grew into the match. Focusing their attacking options via the flanks, both wide players began to cause the Darts problems. And it was Joseph Turner who created the opening goal in fine fashion. Hugging the line, Turner received the ball and burst down the right flank, getting beyond Jernade Meade to send a deliciously inviting cross into the box. Striker Tommy Wood accepted the invitation to jump high and send an unstoppable header beyond Dan Wilks to give his side a deserved lead. With the hosts stunned and struggling to get any rhythm going, Tonbridge continued to control proceedings somewhat, and would create two more meaningful opportunities as the first-half continued. The first came from Aaron Smith-Joseph, as he received a good pass into the danger area before pulling the trigger. Thankfully, Wilks was equally alert to collect the ball confidently (32). Nine minutes later saw Tom Parkinson (who’d come on for Ricky Modeste in the 17th minute) send a long-range drive wide of Wilks’ upright.

Dartford seemed to lack that spark in attack, as they struggled to get their passing game together. Steve King’s men did force a few corners during the opening exchanges, but a relatively solid Angels defence dealt with any secondary threat from Jack Jebb’s set-pieces. Dan Roberts did, however, manage to force goalkeeper Jonathan Henly into a good save with his strike in the fourth minute. With the physicality of the game increasing as the clock continued to tick, it was only a matter of time before the referee would have to get out his card. And, sure enough, Noor Husin was the first to receive a yellow card for his late challenge on Tom Parkinson two minutes from half-time. Tonbridge’s Jerry O’Sullivan was next to go into Mr Wayne Cartmel’s book, as his late challenge stopped a promising Dartford attack (45). Jack Jebb stepped up to take the resulting free-kick, which was approximately twenty yards out. And, with Henly beaten, Jebb was unlucky to see his outstanding effort cannon back off the post. Merely seconds later, though, the midfielder had the last laugh! As the hosts collected the ball in the midfield, it was brilliantly played towards Ade Azeez. With his back towards goal, he jumped only to be collected by an over-ambitious Henly, and the loose ball fell perfectly for Jebb. The birthday boy, who’d also be rewarded with the Man of The Match award later, struck the ball superbly to level the score with his first goal of the season (45+1). Spurred on by that goal, the Darts almost took the lead in emphatic fashion two minutes into the second-half. The move started down the right flank, where Ade Azeez sent in a perfect ball for Dan Roberts. The latter struck the ball first time, but it flew the wrong side of Henly’s upright.

In a move to try and turn the tie completely around, Steve King replaced Bagasan Graham with Danny Leonard in the 58th minute, and it almost paid dividends two minutes later. Leonard, using his pace, got himself into a great position to feed the ball to Dan Roberts, but the latter’s effort was saved by Henly. George Porter then replaced Ade Azeez (73) and Luke Allen came on for Kieran Murtagh (77), as the hosts tried to take advantage of the superior pace within their ranks. However, their efforts were in vain as an increasingly stubborn Angels side dealt with each attack accordingly. In fact, it was the visitors themselves who thought they’d scored the winning goal in the 83rd minute. However, Ibrahim Olutade (who had replaced Tommy Wood in the 77th minute) was adjudged to be in an offside position. Three minutes previous to that saw Dan Wilks make a fine, yet comfortable save from a Tom Beere effort on the edge of the penalty area. Despite this not being one of the better performances, the Darts team did dig deep to ensure that Bericote Powerhouse Princes Park remains a fortress, as Dartford remain unbeaten at the top of the National League South table. Sometimes you just have to put in a determined shift to grind out a positive result against competitive opposition. 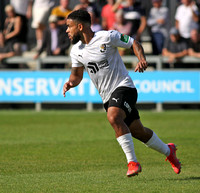 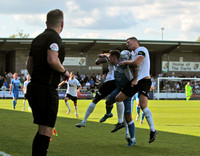 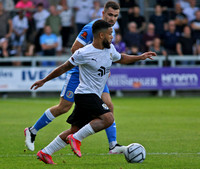