Man of The Match, George Porter, scored a brace and Marcus Dinanga netted, as Dartford saw off Dorking Wanderers in a thrilling game at Bericote Powerhouse Princes Park. As two of the best teams in the league came head-to-head, the 1,522 supporters who endured the freezing cold conditions were treated to arguably the game of the season. And, it was the hosts who proved to be the better side initially, as they dominated for a majority of the first-half. However, having notched up thirteen victories in the previous 14 league games, Dorking were always going to be a threat… more on that later. Despite the visitors launching the first attack, which forced Connor Essam to remain alert to clear the danger (2), the Darts soon took control as they bossed the midfield for long periods, before opening the scoring after fifteen minutes. A delightful chipped ball over-the-top dropped nicely for George Porter, who raced through on goal after breaching the Wanderers’ offside trap. Goalkeeper Dan Lincoln spread himself, but Porter calmly slotted the ball home to net his third league goal of the season.

The Dartford number ten was playing an absolute blinder, and could have doubled his goal tally in the 22nd minute, but his effort from distance flew over Lincoln’s crossbar. Not to worry though, because three minutes later it was indeed 2-0, and what a goal it was! As Dartford pressed into their opponent’s box, the ball fell to Marcus Dinanga and he turned before firing a delightful strike beyond Lincoln and into the back of the net! The visitors responded to win a corner kick within two minutes. Jordan Cheadle got on the end of the set-piece, but his effort was deflected wide before Alfie Rutherford followed up seconds later, which Dan Wilks saved comfortably. The football was breath-taking during this period, as Wanderers pushed forward in an attempt to get back into proceedings, while the Darts exploited the open space. None more so than in the 29th minute when a terrific move enabled Kalvin Kalala to race along the right-flank. Cutting into the box, the lively winger had options as teammates raced into the danger area. Kalala, though, only had one thing on his mind as the goal beckoned, only to fire over the crossbar. Unfortunately, with a minute of the half remaining, manager Steve King was forced into making his first change in personnel after the excellent Luke Allen picked up an injury. Kieran Murtagh was his replacement. Whilst on the subject of injuries, it’s worth noting that Junior Tiensia was injured in the mid-week game leaving the Darts without a left-back. Mr King dipped back into the transfer market to bring in Jayden Sweeney on loan from Leyton Orient, and it’s fair to say that the debutant was having a very good game as well.

As the second forty-five began, the visitors brought on Barry Fuller to replace Jordan Cheadle and, within ten minutes they’d pulled a goal back via Niall McManus after he’d slotted home following Wes Fogden’s deflected effort. The hosts responded well with Kalala seeing an effort blocked by the Wanderers’ defence (58), before midfielder Jack Jebb saw his long-range drive fly narrowly wide of Lincoln’s upright (59). He had another opportunity when the referee, Mr Andrew Humphries, awarded Dartford a free-kick in a dangerous position six minutes later. And, while the set-piece specialist beat the Dorking wall, the ball didn’t come down enough, and bounced off the top of Lincoln’s crossbar. As the game reached the 72nd minute, George Porter stepped up again! First he forced a brilliant save out of Lincoln, before forcing the goalkeeper into a more routine save three minutes later. However, the striker restored the host’s 2-goal advantage four minutes after that (79). The goal came after the excellent Kalala had played him through and Porter was there to put the ball into the bottom corner. Once again, the visitors responded immediately as Jimmy Muitt (on for Wes Fogden on 58 minutes) and Barry Fuller combined to set up McManus, who forced Dan Wilks into a diving save in the 82nd minute. Then, from a corner, they’d pulled another goal back after Nicholas Wheeler managed to score after firing through a crowd of bodies (83)! Steve King introduced fresh pairs of legs with Kory Roberts replacing Ody Alfa (85) and Ade Azeez coming on for Marcus Dinanga (86). While the visitor’s final substitution occurred back on 69 minutes, when Luke Moore came on for Davide Rodari. 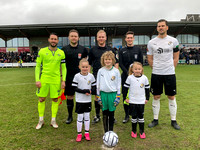 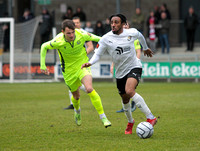 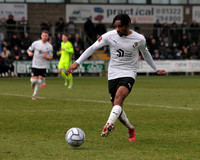 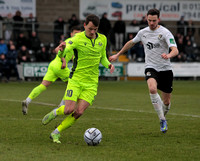 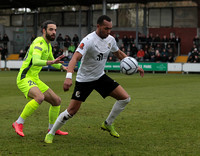 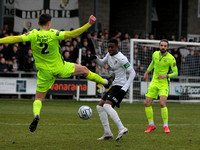 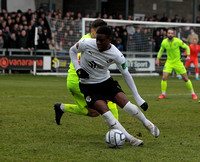