Dartford were two games away from the F.A Cup first round, but they needed to overcome Oxford City at Marsh Lane to progress in the competition. It wasn’t the first time Dartford have drawn Oxford City in the F.A Cup: the only other meeting in the competition was back in 1935. That season, the Darts won 5-1 with goals from Robert Patrick, two from Arthur Mercer and one each for George Nicholas and Fred Dell. Victory set up a run to the third round and a famous 3-2 defeat against top flight Derby County, in which the Darts led 2-0.

Tom Knowles was recalled to Cambridge City which opened up an opportunity for the three month loan of Andre Coker from Maidstone United (the fifth loanee in two months).

With a four-goal lead and less than half an hour to play, City began to lower the tempo of their game. Mark Jones took the opportunity to give two younger players a welcome runout with a double substitution in the 75th minute: Zac McEachran and Kabby Tshimanga – the two hattrick heroes of the FA Cup so far – making way for Craig Fasanmade and Leon Lobjoit. If there were any signs of complacency creeping into the Hoops' game, these were quickly erased in the final 10 minutes. Delano Sam-Yorke's speculative effort once again rocked the crossbar in front of the Shed before Elliot Bradbrook's commanding header got the Darts off of the mark in the 82nd minute. The muted celebrations of the players and travelling supporters marked this otherwise impressive finish as the consolation goal it was. With so little time left on the clock, the three-goal lead was enough for even the most pessimistic City fan to begin cancelling their plans for the 20th of October and the final whistle soon confirmed what was already clear – Oxford City once again making their way into the hat for the Fourth Qualifying Round. 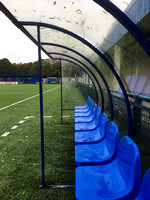 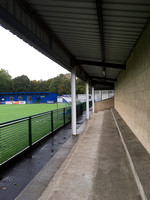