Dartford’s defensive lockout of the new year continued, as a late goal from Nassim L’Ghoul secured all three points against Tonbridge Angels at Bericote Powerhouse Princes Park on a cold Tuesday night. With another nationwide lockdown announced just 24 hours previously due to the continuing saga surrounding COVID-19, Dartford’s Academy Coach, Ben Greenhalgh, had to make do without fans for his first return to Bericote Powerhouse Princes Park in the colours of Tonbridge Angels. And, even though the Angels’ number seven would prove to be a danger, especially from set-pieces, he travelled back with his teammates empty handed on this rather soundless occasion, as his former team finished the night top of the National League South. To be fair, the hosts weren’t at their best during this encounter, yet Tonbridge offered very little in attack themselves, as the Dartford defence snuffed out a majority of their attacking play with ease. In fact, the Angels had to wait until the 20th minute to register their first meaningful effort on Craig King’s goal. And it was Greenhalgh who created it, as he sent a long free-kick into the penalty area, which King gathered, but dropped as he was fouled by another Tonbridge player.

The Darts, meanwhile, raced out of the blocks immediately and pressed the visitors into their own half with some exquisite passing played at a high tempo. Within four minutes, Steve King’s side had earned themselves two corners, and a third would be rewarded in the sixteenth minute as well. However, as was the case in the last game here, the Dartford attackers just couldn’t locate that deadly final touch when presented with opportunities. Chris Dickson, who was on fire throughout, struck the post in the fourth minute, before Nassim L’Ghoul sent a drive wide seven minutes later. As we entered the 13th minute, some terrific play opened up the Angels’ defence, leaving the tireless Noor Husin (who would be named as the Man of The Match later) to collect the ball. He shot from distance, only to see his effort tap the outside of Jonathan Henly’s upright. As Dartford grew more confident and controlled the game with quick one-two passing, a break materialised when Jazzi Barnum-Bobb raced down the right flank as we passed the half-hour. He then beat his man to send a pacey cross into the Tonbridge danger area. Dickson got to the ball first, but could only direct his header straight into the arms of Henly. A similar move down the right would occur in the 42nd minute, as Dickson held the ball up excellently before passing to L’Ghoul. The lively winger then sent a fierce ball across the face of goal, which Jacob Berkeley-Agyepong collected before seeing his shot saved by Henly!

The second forty-five began in much the same manner as the first, and it didn’t take long for goalkeeper Henly to be tested again. This time it was Dickson with the shot after another good attacking move by his teammates, but the Angels’ goalkeeper sent the ball behind for a corner (48). Dickson became provider five minutes later, holding up the ball perfectly before setting up Berkeley-Agyepong, who danced through the Tonbridge defence magnificently, only to then fire over the crossbar. As the game approached the hour, Jack Jebb tried his luck after L’Ghoul had created an opening for him. Unfortunately, Henly was there once again to collect the ball with ease. A Tonbridge break looked to be on the cards until Jazzi Barnum-Bobb made the foul, earning himself a yellow card in the process. The resulting free-kick came to nothing and the visitors were back defending in numbers shortly afterwards. If anyone deserved a goal tonight, it would be Dickson or Berkeley-Agyepong, because both players got themselves into some terrific positions inside the Angels’ box. The former used his strength to perfection at times, yet was also fearless in and around the six-yard box, none more so than in the 63rd minute, when he threw himself at the ball to get on the end of a wonderful cross… He reached the ball (naturally) and set up Berkeley-Agyepong perfectly. But, once again, the midfielder could only stand and watch, as his thunderous strike smashed off the outside of the post! With time running out, Steve King moved to introduce a fresh pair of the legs in the 71st minute, as Dickson made way for Elliott Romain. The visitors also made changes quickly, as D’Sean Theobalds replaced Zak Guerfi (71), Matthew Rush replaced Alex Akrofi (73), and Adam Lovatt was replaced by Khale Da Costa (76). The changes had little effect for the Angels, however, as they would be restricted to just one noteworthy opportunity in the 86th minute. It was Da Costa who created it, as he made space for himself to shoot, but Luke Allen (who would replace Jack Jebb in the 81st minute) put his body on the line to make an outstanding block. The Dartford pressure was finally awarded nine minutes from time in a move that thoroughly deserved a goal. As the hosts surged forward, the trio of Berkeley-Agyepong, Husin, and L’Ghoul all combined to rip open the Tonbridge defence, enabling the latter to race into the box and smash the ball home from a tight angle. Not completely satisfied with opening his goal account for the Darts, L’Ghoul could have added a second during stoppage time at the end of the ninety. Jordan Wynter, who had entered the field to replace Ky Marsh-Brown in the 88th minute, fed L’Ghoul with a delightful ball. As L’Ghoul got himself into the penalty area he pulled the trigger, but sent his effort agonisingly wide of the post. 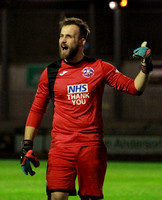 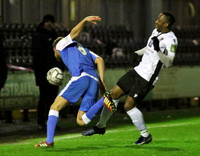 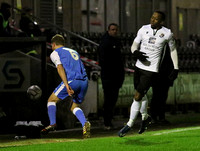 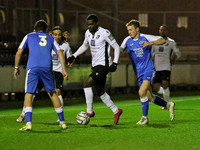