Created 20-Jan-20
44 photos
18 January 2020. A 1:0 for Slough Town.
Dan Roberts scored the only goal of the game to give Slough Town their first win of 2020 and keep them firmly in the hunt for a playoff place. This was an excellent three points against a Dartford side which came into the game off the back of five consecutive league wins. It took a little while for the game to get going, with both sides feeling each other out knowing it would be a tight affair.

The final moment of note came five minutes from time, when Sanchez Ming - who had already been shown a yellow card in the first half - began to get more and more frustrated and allegedly pushed one of the linesmen after he had given a throw-in against him. After a brief talk with his colleague, referee Wootton showed Ming a straight red card. It was reported that Ming saw red for violent conduct, according to the officials, and was handed a four-match ban. Dartford FC won their appeal and Steve King said: “The referee put in that it was violent conduct (by Sanchez) against the linesman. We produced the video and Sanchez never got in his face, he never pushed him like they said, so they’ve looked at it and dismissed it straight away. If you put in that it’s violent conduct, you’ve got to show that it’s that. You can’t change it (afterwards) and say he swore, which one is it? We blew the Sanchez one up (on the video) and it showed he hadn’t done it.” So red card was rescinded. 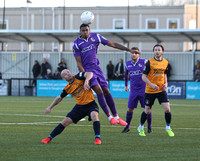