Steve Kennedy, sports reporter, remarked on Twitter "Dartford have used 33 different players in the league and 36 players in all competitions this season and its not even Christmas yet! That's just too many for any level of consistency" 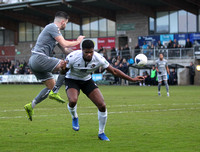