Dartford travelled to East Dulwich, where they faced Dulwich Hamlet at Champion Hill, and continued their excellent start to the season with a hard-fought 2-0 win.

Despite a bright start from the hosts, which saw them force a free-kick and a corner, it was Dartford who opened the scoring in the seventh minute. The goal came after the visitors were awarded a free-kick themselves on the halfway line. Jack Jebb delivered a fabulous trademark long ball, which captain Tom Bonner nodded down towards Josh Hill, who smashed the ball beyond goalkeeper Charlie Grainger. Stunned, Dulwich continued to probe in attacking areas, which resulted in James Dayton sending an effort wide of Dan Wilks’ goal in the twelfth minute. Two minutes later saw another excellent Dartford move that should have doubled their lead. The opportunity was created after excellent work by the tireless Noor Husin, who played the ball to Jebb from the left-hand side. Jebb, who was also having a good game, took one touch before pulling the trigger and forcing Grainger into a top save. There was no room to breathe during this entertaining first-half, as the hosts took the ball straight down the other end in another swift attack. Chike Kandi was the danger man on this occasion, but his header flew just over Wilks’ crossbar (15). The hosts won a corner ten minutes later, but the solid Dartford defence cleared the danger confidently. Another fluent attack saw Jebb pass a superb ball through to George Porter, who managed to breach the defence in style. Unfortunately, Grainger was alert and managed to get a hand to the ball as Porter tried to get around him, thus clearing the danger (29). Kieran Murtagh then sent a header over Grainger’s crossbar from a corner (35), before Porter sent a header wide of the upright (37). The latter effort was created by Husin, who had sent an unbelievable pass towards the Dartford number ten!
Meanwhile, if we rewind back to the twentieth minute, referee Greg Rollason took centre stage in one of the talking points of the game. As Noor Husin received the ball, his opposite number four, Michael Timlin, came crashing in with a horrendous and late challenge worthy of a straight red card. However, Mr Rollason had other ideas, issuing the fortunate Timlin a yellow instead!
Steve King’s side started the second-half on the front-foot, and were awarded a free-kick after just five minutes. Jebb sent a dangerous set-piece into the Dulwich box and his teammates appealed for a handball, but Mr Rollason wasn’t interested. Three minutes later saw the other tireless midfielder, Kieran Murtagh, almost become provider with a marvellous pass to release George Porter. The latter was in on goal, but Dulwich defenders just managed to throw themselves into the path of the ball as he pulled the trigger, thus blocking his shot.
As the clock continued to tick, it felt like the Darts were queuing up to score during this period. First, Husin sent an effort wide (57), before Azeez received the ball from Murtagh (after the latter’s powerful driving run) and forced another good save out of Grainger (59).
As is to be expected in football, however, the hosts managed to get hold of the ball and started to get themselves back into the game with periods of possession after the hour. Despite probing and creating opportunities, however, they rarely broke through the Dartford defensive line led by Tom Bonner. And, to ensure his side kept hold of the lead, Steve King introduced fresh legs with Dan Roberts replacing Danny Leonard (65), Connor Essam replacing George Porter (75), and Tyrique Hyde coming on for Kieran Murtagh (80).
Another reason why us football fans love our sport so much is because anything can happen within seconds, and so it proved to be the case as we passed the 89th minute. Former Dart, Darren McQueen, collected the ball in the Dartford half before using his skill and quick feet to sprint down the Dulwich left-flank. Cutting inside, he then fired a ferocious effort towards the top corner. Thankfully, the ball sailed past the outstretched hand of Dan Wilks and struck the side-netting.
Dartford took the ball straight down the other end, forcing a corner. Jack Jebb and Ade Azeez played a little one-two, before the former sent a dangerous cross into the Dulwich box. Substitute, Tyrique Hyde, collected the ball, controlled it with a couple of cheeky kick-ups, before slotting it into the back of the net to score his first goal of the season and settle matters on the pitch once and for all (90).
The result sees the Darts remain at the top of the National League South table, while maintaining their winning start. Goalkeeper, Dan Wilks, must surely be delighted having conceded just once in the opening three games. A feat that he will want to continue when Eastbourne Borough come to Bericote Powerhouse Princes Park on Monday. 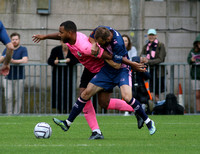 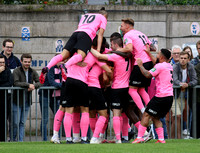 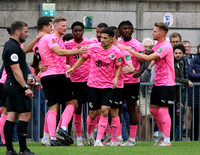 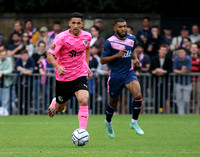 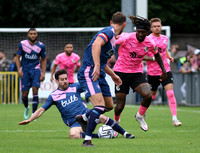 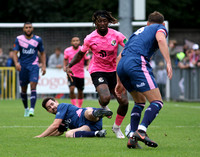 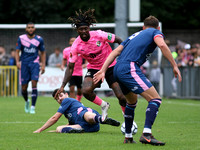