Before the kick off a 2-minutes silence was respected by the 712 supporters at Cherrywood Road in honour of those who had made the ultimate sacrifice in the name of freedom and peace. The respect continued as we reached the seventh minute, as a minute’s applause took place in honour of Bath City’s Alex Fletcher. The player had suffered a horrific injury during Bath’s mid-week game, and the united love and support showed to Bath’s number seven has been felt across the league.

To be honest, Alan Dowson’s side were fortunate to only trail by two goals at the break, as Farnborough threatened to over-run their opponents. They came close once again after 32 minutes, when Wynter’s poor back-pass left Joe Young in no-man’s land. Thankfully, the ball flew just wide of the far post, and Dartford breathed a sigh of relief. Clearly unhappy with his side’s first-half display, Alan Dowson’s made an immediate double change at the start of the second-half. Kristian Campbell and Davide Rodari came on to replace Keiran Murtagh and Charlie Sheringham, as the visitors looked to get themselves back in the game.

The Darts did eventually pull themselves back into the game after a good strike by Smith had forced a corner. Luke Coulson whipped the ball into the box and Campbell got on the end of it to bury an excellent header beyond goalkeeper Jack Turner in the 65th minute.
The hosts responded and won a free-kick in a dangerous position after Rodari had committed the foul. The Dartford player was booked by referee Mr Dale Wootton, and Olly Pendleberry restored his side’s two-goal advantage with a delightful free-kick which left Joe Young with no chance (70).
Alan Dowson then threw on Alex Wall to replace Jordan Wynter (72) in the hope of trying to salvage something from the game, but it wasn’t to be. The closest they came was when Pierre Fonkeu was fouled on the edge of the Farnborough box in the 85th minute. Substitute Wall took the free-kick, but the Farnborough defensive wall held firm as the hosts saw out the game.
The result sees Dartford’s 11-game unbeaten run in the league come to an end. They remain in second place in the National League South table, but results elsewhere sees the challenge for promotion remain ultra competitive.
by Chris Palmer. 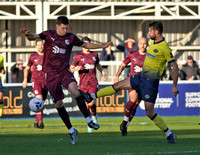 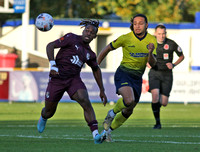 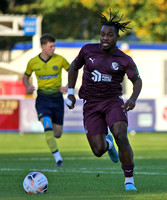 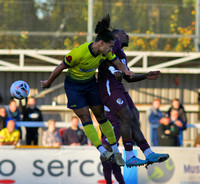 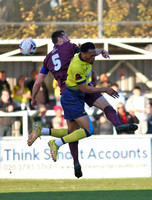 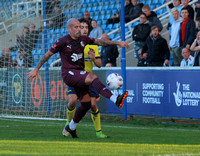