Dartford hosted League One outfit Charlton Athletic on a glorious summer afternoon at Bericote Powerhouse Princes Park.
Both teams played their part in an entertaining game, as the temperature increased under the sun. However, it was the visitors who just edged this contest, as they looked a little sharper in attack. Take nothing away from the Darts, though, because they more than matched their League One opponents, and could have snatched a late equaliser in front of a packed stadium.
Dartford started brightly and Luke Wanadio was proving to be a menace, frequently using his pace to torment Charlton’s Ben Purrington at left-back. But, it was his teammate who almost opened the scoring as early as the ninth minute. The opportunity was created when George Porter received the ball from a Dartford attack. He sent the ball into the danger area, where Dan Roberts connected with it perfectly. Unfortunately, his effort forced a fine save from Charlton goalkeeper Nathan Harness, who tipped the ball onto the upright.
Four minutes later saw the Addicks retaliate with a fine attacking move themselves. The ball found Albie Morgan in space, and he tried his luck from distance, forcing Craig King into a great save to tip the ball over the crossbar. Morgan was a certain threat to the Dartford defence, and he had already warned them of his abilities two minutes earlier when Connor Essam had to clear his strike with a decent header.
Despite the heat, the game was end-to-end, with both teams quick to attack. Trialist #22 was lively and narrowly missed his teammates with a dangerous cross across the Charlton box (18). Then King was called into action again to pull off a top save to deny Conor Washington from close range (20).
Proceedings did calm down a little after the necessary drinks break (23), and clearcut opportunities were few and far between. Yet, it was the hosts who struck first when the pitch opened up again. Bagasan Graham was the player who should have broken the deadlock when the Darts drove forwards. He breached the defence, rushed into the box, cut inside and sent his strike goal-bound. Unfortunately, his 39th minute effort was straight at Harness.
Luke Wanadio almost had the last laugh of the first-half, but his effort from inside the box went just wide of Harness’ post (45). Moments before that, Diallang Jaiyesimi was guilty of missing the target at the other end, when his header went narrowly wide of the Dartford goal.
The Charlton player made amends five minutes into the second-half, when he was gifted enough space to send a right-footed strike beyond Dan Wilks and into the bottom corner. Steve King’s side were undeterred though, and hit back immediately when Luke Allen and Bagasan Graham combined well. The former setup the latter with a sweet ball, and Graham pulled the trigger to send the ball beyond Harness to level the score (52).
With sixty minutes on the clock, the visitors made numerous changes in personnel, offering the Darts the opportunity to take a drinks break before play continued. Six minutes later saw the visitors, or rather, Josh Davison hit the hosts with a sucker punch. With the Addicks pressing forward in numbers, Davison collected the ball and sent it whistling past Wilks and into the bottom corner from 25 yards.
There was another drinks break in the 70th minute, which was crucial for the players in the soaring temperature, and the Darts appeared to spark back into life again. Searching for the equaliser, they pressed forward confidently and created opportunities.
Goalkeeper James Beadle made a good save from a powerful strike from the edge of the box, which arrived through a gathering of bodies (74). Then defender Jason Pearce prevented Ade Azeez from getting through on goal with a well-timed sliding tackle (75), before Noor Husin saw his point-blank range effort blocked by the fired-up Beadle (80).
Meanwhile, Charlton’s Jeremy Santos saw his fierce strike ricochet off of Tom Bonner, forcing Dan Wilks to make an excellent save and keep his side in the match (79). Yet it was Dartford’s Danny Leonard who almost earned his side a well-deserved draw in the 91st minute. As the hosts threw themselves forward one final time, Leonard broke through and sent the ball towards the back of the net, where Ade Azeez met it to tap it home. Unfortunately, he was believed to have moved too quickly and saw his goal ruled out for offside.
So, a highly entertaining game came to an end with the visitors coming away having narrowly won the contest. Once again, Steve King’s Dartford matched their League One opponents on the pitch, and were unlucky not to have earned the draw (or win for that matter). Once again, Tom Bonner and Co can be proud of their performance in such a stern test.
TEAMS:
DARTFORD
FIRST HALF: Craig King, Trialist #12, Trialist #22, Connor Essam, Josh Hill, Bagasan Graham, Luke Wanadio, Kieran Murtagh, Jack Jebb, George Porter, Dan Roberts.
SECOND HALF: Dan Wilks, Jordan Wynter, Jernade Meade, Noor Husin, Josh Hill, Tom Bonner ©, Luke Allen, Jack Jebb, Danny Leonard, Bagasan Graham, Ade Azeez.
CHARLTON
FIRST HALF: Nathan Harness, Ben Purrington, George Dobson, Akin Famewo, Diallang Jaiyesimi, Jayden Stockley, Albie Morgan, Conor Washington, Adam Matthews, Deji Elerewe, James Vennings.
SECOND HALF: James Beadle, Jacob Roddy, Jason Pearce, Charles Clayden, Charlie Baker, Johl Powell, Hady Ghandour, Nazir Bakrin, Samuel Oguntayo, Jeremy Santos, Aaron Henry, Wassim Aouchria, Josh Davison.
By Chris Palmer 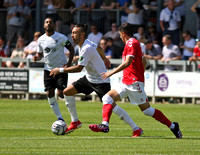 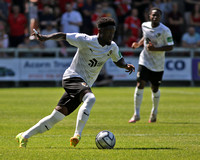 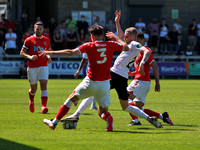