Saturday 26 March is Non League Day this year. Non-League Day was set up by James Doe in 2010 as a social media experiment, after being inspired by a pre-season trip to Devon to watch Queens Park Rangers play at Tavistock. It has now grown to become an annual part of the football calendar, backed by Premier League and Football League clubs, MPs, celebrities, media organisations, charities and most importantly the non-league clubs themselves and the fans who turn up on the day. Always scheduled to coincide with an international break, Non-League Day provides a platform for clubs to promote the importance of affordable volunteer-led community football while giving fans across the country the chance to show support for their local non-league side.

The Darts finished the game the stronger of the two sides, but just couldn’t add to their score. Ade Azeez forced a good save out of Julian on 87 minutes, before a dangerous cross across the face of goal by Jack Jebb just missed Connor Essam late on!
The result sees Dartford end a three-game winless run (in all competitions) on the road, while remaining in touch with first and second positions in the National League South table.

Dartford probed once more, this time with a delicious ball over-the-top towards Marcus Dinanga. But, the in-form striker couldn’t keep his 11th minute effort down. Five minutes later saw Jake Robinson rush onto a through-ball, only to be floored by Ruaridh Donaldson on the edge of the Hampton box. Mr Searle ignored the appeals though, much to the fury of the Dartford players and supporters.

The referee did get his card out a minute later though, after Imran Uche fouled Dartford debutante Samir Carruthers. Imran Uche was shown a yellow card, as was Dartford’s captain Tom Bonner for giving his point of view a little too often.
Report by Chris Palmer. 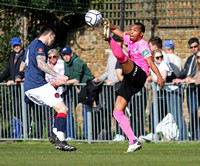 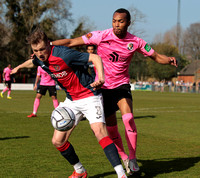 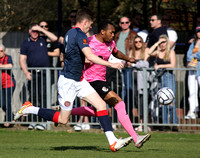 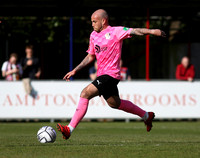 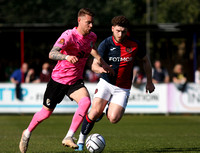 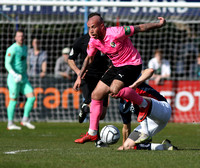