A Jake Robinson brace helped Dartford’s one hundred percent record continue, as they overcame Eastbourne Borough in front of 1,193 supporters at Bericote Powerhouse Princes Park.
Manager, Steve King, altered his personnel slightly in a bid to keep the current momentum going, with Connor Essam, Tyrique Hyde, Jake Robinson, and Luke Wanadio all slotting into the starting eleven to face The Sports. And the impressive Darts forced their first corner within two minutes, as they pegged the visitors back. Jack Jebb sent in a trademark cross, but Tom Bonner’s header ricocheted off a defender and went wide of Curtis Anderson’s upright.
Eastbourne didn’t take that lucky escape seriously and, sure enough, were behind five minutes later after Jake Robinson got on the end of another excellently played set-piece to stab the ball home.
The Darts were rampant and came close again in the 11th minute after forcing another corner. Jebb’s wicked ball into the danger area eventually reached Noor Husin on the edge of the penalty area, who’s thunderous effort smashed against the post. And five minutes later, Steve King’s side hit the woodwork again! On this occasion, it was George Porter who managed to get on the end of Jebb’s free-kick, only to see his close-range effort strike the post!
Luke Wanadio was making the most of his starting opportunity, as he terrorised Kasim Aidoo on the right flank. And he was unlucky not to get on the scoresheet himself in the 17th minute. Using a wonderful combination of skill and pace, the Dartford number 19 beat his marker before cutting inside and pulling the trigger, only to see Anderson pull off a good save.
Robinson, who would be presented with a thoroughly deserved Man of The Match award later, was next to test Anderson with his scuffed effort in the twentieth minute. However, the lively striker doubled his tally six minutes later when he stepped up to take a spot kick after the Darts were awarded a penalty for a handball inside the box. Full of confidence, Robinson fired his side 2-0 ahead with a low shot into the bottom corner.
The hosts had The Sports on the ropes as they came close again in the 34th minute. This time it was Jebb’s dangerous cross, which just missed George Porter. A similar opportunity presented itself again, only this time Wanadio was the one to send a teasing cross into the box after some inspirational football from the Darts. Unfortunately, Robinson just couldn’t reach the ball in time (41), a feat that would repeat itself again under similar circumstances in the 45th minute.
Just when you thought this would be a walk in the park for the Darts, Eastbourne were given a golden opportunity as the second forty-five got underway. Connor Essam and Jordan Wynter appeared to lose their focus for a second, allowing Greg Luer through. Dan Wilks rushed out to try and thwart Luer, but the Eastbourne player slotted the ball home to halve his side’s deficit (46).
Despite being slightly stunned, the hosts dusted themselves down and continued to create opportunities. First to try was Robinson, who sprinted down the right flank before sending a delicious pass towards Tyrique Hyde. The midfielder struck the ball well, but could only watch as it flew over Anderson’s crossbar (51).
Robinson would have one more opportunity himself before being replaced by Ade Azeez in the 66th minute, however, his 65th minute strike was blocked from close range. While on the subject of substitutions, Steve King made the usual three, but the first was enforced after George Porter was injured in the 56th minute. Dan Roberts replaced him and Luke Allen would replace Tyrique Hyde sometime later (76).
Meanwhile, Wanadio continued his impressive afternoon when he set up Jebb after a swift counter-attack in the 75th minute. Unfortunately, Jebb’s effort sailed narrowly wide of Anderson’s post. Wanadio would then receive a yellow card for a clumsy challenge two minutes later – the only real blot on an otherwise excellent performance from the winger.
With time running out, one did begin to wonder which team would crack under pressure and concede the next goal. To be honest, Eastbourne had given a good account of themselves during the second-half, but hadn’t really tested Dan Wilks in the Dartford goal. With both Dartford full-backs riding their luck on occasions, the Princes Park faithful would have been forgiven if doubts began to creep in.
They needn’t have worried though because, with six minutes remaining the mistake occurred, and it was Eastbourne goalkeeper, Curtis Anderson who made it! Too preoccupied with trying to see his team get the equaliser, he leisurely rolled the ball harmlessly out towards his defenders… only for Dartford to storm in and intercept the ball, before eventually threading it out wide-left towards Dan Roberts. He spotted the opportunity, sent a brilliant ball into the box, and there was Ade Azeez to head it home to put the game to bed.
The Dartford number 14 almost became the provider as we reached the 90th minute, when he flicked a terrific ball through to Roberts. Unfortunately, the latter’s strike was somehow blocked by The Sports’ defence, and the hosts saw out the five additional minutes comfortably.
The result sees the Darts remain at the top of the National League South table. With twelve points from twelve, Steve King’s men have opened a two-point lead over Kent rivals Maidstone United, and next on the agenda will be a trip to tenth-placed Bath City.
TEAMS
DARTFORD: Dan Wilks, Jordan Wynter, Jernade Meade, Connor Essam, Tom Bonner ©, Tyrique Hyde, Jack Jebb, Jake Robinson, Noor Husin, George Porter, Luke Wanadio.
SUBSTITUTES: Luke Allen, Ade Azeez, Dan Roberts, Josh Hill, Bagasan Graham.
EASTBOURNE BOROUGH: Curtis Anderson, Jake Elliott, Mitchell Dickenson, Joel Rollinson, James Hammond, Greg Luer, Charlie Walker, Chris Whelpdale, James Beresford, Charlie Towning, Kasim Aidoo.
SUBSTITUTES: Steven James, Joshua Oyinsan, Dominic Hutchinson, Leone Grauata, Gregor Shaun. 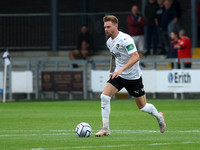 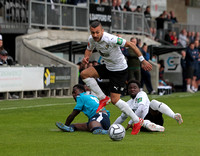