Charlie Sheringham returned from his loan period to score a hat-trick, as Dartford ran rampant in a dominant display against Billericay Town at Bericote Powerhouse Princes Park to return to the top of the National League South table.
The Darts came racing out of the blocks and attacked the visitors like a wounded animal from the opening seconds. The fact that Steve King was forced into shuffling his side due to seven players being unavailable only seemed to add fuel to Dartford’s fire, as they dominated proceedings from start to finish. Not only was Sheingham’s immediate return to the starting eleven a surprise, but the addition of two new signings, of which 24-year old goalkeeper, Daniel Wilks (ex-Welling United) also started, was equally as surprising. Yet, each and every Dartford player put in an excellent shift this evening to deliver a statement of intent to the rest of the league after suffering that loss against Braintree Town at the weekend. The other new faces included the returning Cameron Brodie and former Huddersfield midfielder Denilson Carvalho, both of whom were included on the substitutes bench. Both were able to enjoy their teammates set about destroying the visitors in a game which saw Josh Hill almost open the scoring before sixty seconds had been played! The big defender, who slotted alongside captain Tom Bonner and Connor Essam for only his second start of the season, saw his towering header cleared off the line from Jack Jebb’s corner. The visitors offered very little during the opening exchanges, as a dominant Darts side had them pegged back upon the ropes while raining in blow after blow. The Billericay defence was torn open again in the seventh minute, when Femi Akinwande and Charlie Sheringham combined well and the latter sent in a peach of a cross towards Nassim L’Ghoul. Goalkeeper, Harry Palmer, was elert enough to parry L’Ghoul’s header before the defence managed to clear. Three minutes after that saw Sheringham at it again, as he got onto the end of a Connor Essam cross. Despite the referee blowing his whistle for offside, the big striker still managed to hit the target, with the visiting defence clearing the ball off the line. With fifteen minutes on the clock, the visitors showed that they were indeed a threat, when Jake Robinson registered his side’s first attempt on Daniel Wilks’ goal. The new goalkeeper was alert to the threat and saved easily though. Soon, however, it was all hands on deck, as the hosts powered forward and Palmer was again called into action, as he punched a Jack Jebb freekick clear after the lively L’Ghoul was fouled while attempting to drive forward. Billy Knott tried to pull his side into the game by pressuring the excellent David Ijaha, who recovered from the Billericay player’s exploits and dealt with the danger. Once again, the Darts were on the move, and a bullet header from L’Ghoul ricocheted back towards Essam, who hit a thunderous strike which cannoned back off of Palmer’s crossbar in the 28th minute. There were a few more opportunities for the hosts towards the end of the half, two of which fell to Akinwande. As Bonner and L’Ghoul combined well down the left flank, the Captain sent a dangerous cross into the penalty area, which eventually reached Akinwande. Unfortunately, his effort sailed high and wide of the Billericay goal (41). He got another opportunity two minutes later, after Luke Allen managed to seek out Jazzi Barnum-Bobb. The latter crossed the ball and Akinwande twisted and turned on the edge of the box, before pulling the trigger. Sadly, Palmer managed to parry the ball and the defence cleared the danger once again!

The opening exchanges of the second forty-five saw Steve King’s men literally queuing up to score, as they continued driving forward. First Akinwande and Sheringham combined, before Palmer saved the latter’s effort (48). Then David Ijaha, who while having an excellent game started the move, also nearly finished it superbly, but his effort flew over the top of the crossbar. As is the norm in football, the opposition always manages to create an opportunity no matter how much you’re dominating. And Billericay’s moment came in the 54th minute. In a rare attack, the visitors were awarded two successive corners, and the second one almost saw them take a shock lead. As the corner floated into the Dartford box, it was eventually struck towards the goal-mouth with bodies everywhere. Jake Robinson was one of those bodies and his teammate’s strike ricocheted off of him and went behind for a goal kick. Three minutes later saw Robinson rue that unintentional block even more, as the hosts took a well-deserved lead. Once again, the threat came from the left-flank, as Nassim L’Ghoul and Tom Bonner combined, enabling the Captain to send a wonderful right-footed cross into the danger area. Connor Essam leapt to head the ball back in the other direction, and there was Charlie Sheringham to send the ball into the back of the net. The Darts were full of confidence at this point and attacked with more fluency than before. Sheringham sent a header wide, but Luke Allen was there to collect the ball before serving it to Akinwande. Akinwande, making his home debut, struck the ball well, but it hit L’Ghoul, who had inadvertently found himself in its flight path (60). The striker would then use his strength to beat his man in the 66th minute, but was floored for his troubles. Jebb took the free-kick, sending the ball into the box, and up stepped Sheringham to bury his header to double the host’s lead (67). With 73 minutes on the clock and in full control, the Darts looked comfortable and confident, and yet they still probed for more. Akinwande drove forward owerfully, but couldn’t quite find the target with a left-footed strike (73), and Nassim L’Ghoul was proving to be a nuisance as well. He drove forward in the 78th minute, but lost out to his marker after appearing to take a smack in the face. David Ijaha was alert to the situation and raced in to win back possession, taking out his opposite number in the process. Referee, Andrew Humphries, decided that Ijaha’s challenge was a little late and issued a yellow card… the only blot on what was a flawless performance from Ijaha throughout the game. Not allowing a simple smack in the face to deter him, Nassim L’Ghoul was at it again in the 83rd minute, as he raced into the Billericay penalty area while chasing a long ball. Palmer rushed out, but wasn’t quick enough and clipped L’Ghoul. Mr Humphries awarded a penalty, and up-stepped Charlie Sheringham to smash the ball home to complete his hat-trick (84).
Now in full control, Steve King switched things around by introducing Ky Marsh-Brown for Femi Akinwande (85), Chris Dickson for Charlie Sheringham (87), and Denilson Carvalho for Nassim L’Ghoul (90). Dickson almost added a fourth goal deep into stoppage time, but Palmer was able to deny him. A dominant performance from Tom Bonner and Co saw the returning Charlie Sheringham bag the match ball and the Man of The Match award, as the Darts headed back to the top of the National League South with sixteen games played. The result also sees the Darts unbeaten at Bericote Powerhouse Princes Park in the league in 2021, and having yet to concede a goal. 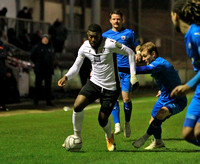 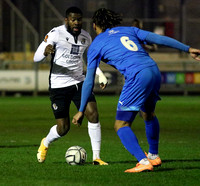 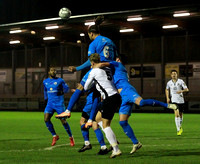 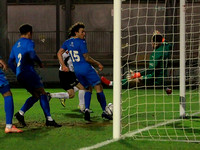 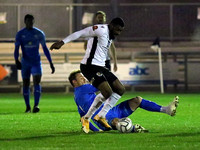