The first football for Dartford match since the passing of HM Queen Elizabeth II last Thursday.

Dartford returned to winning ways, after three goals in eighteen first-half minutes proved to be enough to secure victory over Dover Athletic at the Crabble Athletic Ground. After a well-respected minute’s silence in honour of Her Majesty Queen Elizabeth’s passing, it was the hosts who started the game in a positive manner and forced three corners within the opening eleven minutes. The last of which came about after midfielder Keiran Murtagh put in a terrific sliding challenge to prevent Chike Kandi from getting a shot on Joe Young’s goal. Within seconds of clearing that third corner, the Darts were awarded a free-kick just inside the Dover half. Samir Carruthers sent a diagonal ball into the box, which was eventually met by the boot of Murtagh on the edge. Unfortunately, the shot curled wide of Stuart Nelson’s upright.
With the game evenly matched, Alan Dowson’s men were slowly getting on top of their opponents, before former Dart Luke Wanadio sent a warning shot wide of Young’s near post after 26 minutes. The effort came after a swift counter-attack along the Dover left-flank, following Adam Lovatt’s teasing drive had sailed wide of the post at the other end. Not that Lovatt’s miss mattered though, as a minute later saw the visitors edge ahead with an exceptional strike from Samir Carruthers. The Dartford number four received the ball on the left side of Dover’s box, drifted through two defenders before curling a beautiful strike into the top corner.
The Darts were purring at this point, and added a deserved second five minutes later. Keiran Murtagh sprayed the ball towards Luke Coulson as the visitors attacked confidently in numbers. Coulson chested the ball down perfectly, before chipping the ball over a stranded Nelson (32). The hosts were shell-shocked and, with the defence all at sea, only a Nelson reactionary save and smother prevented Dartford from adding another goal within seconds via the incoming Davide Rodari. However, the onslaught wasn’t over, and the visitors scored their third of the evening as the game reached the 45th minute. This time it was Maxwell Statham’s turn to get in on the act with a delightful solo effort following an attack down the left-flank. From just inside the box, the versatile defender sent a delicious strike into the top corner to net his second goal in a row. There was time for the hosts to respond though, and it was Luke Baptiste who pulled a goal back with seconds to spare, as his excellent low drive found the back of the net before referee, Mr Steve Parkinson, blew for half-time.

Andy Hessenthaler’s side began the second forty-five more positively, as they pressed forward seeking to find a way back into the game. Chike Kandi came close in the 54th minute, but Joe Young stood strong to save well from the Dover man’s effort. The Dartford defence weren’t going to be beaten tonight though, as Captain Tom Bonner kept a tight and organised ship to ensure that the three points remained secure. In fact, the hosts would only really create one more meaningful opportunity throughout the remainder of the ninety minutes. That duly arrived in the 86th minute, but a superb save from Young prevented Alfie Pavey’s half-volley from finding the goal. The former Dartford striker had entered proceedings in the 61st minute, when he replaced George Wilkinson. Meanwhile, Alan Dowson took full advantage of his substitutions, as new signing Kwaku Frimpong replaced Samir Carruthers (56), Charlie Sheringham replaced Davide Rodari (69), and Kristian Campbell came on for Adam Lovatt (90+).
As the Darts controlled the game, they’d create a few opportunities themselves, the best of which took place in the 72nd minute. An excellent attacking move saw Pierre Fonkeu get inside the box, only for a brilliant challenge by Jake Goodman prevent him from pulling the trigger. The resulting throw was then eventually cleared after Alfie Paxman had won a 50/50 challenge with Charlie Sheringham, thus preventing him from getting a shot on goal as well!

And, so the Darts returned home with an excellent victory in this Kent Derby by the coast. The result sees them move back up into tenth place in the National League South table and pull themselves five points clear from tonight’s opponents.
Report by Chris Palmer

Referee: Steve Parkinson, Assists Nick Blogg, Daniel D'Urso.
Att: 626 (not including the 400+ Dartford Supporters that Dover "were informed" were attending and so created a segregated match. LOL.) 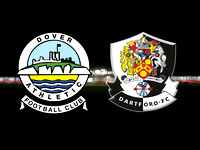 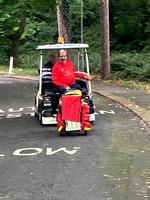 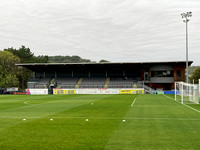 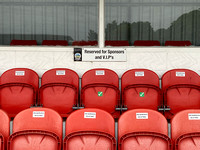 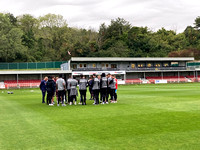 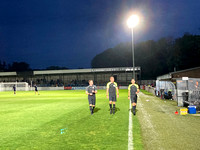 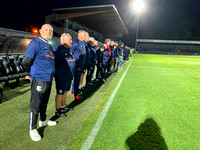 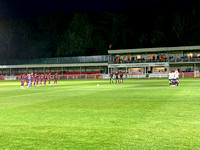 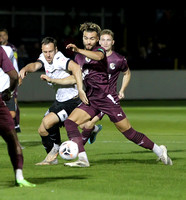 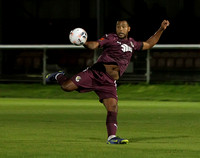 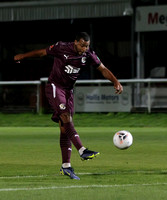