Prophetic words from Truro's manager "we are due a change of luck at some point. By working hard we can change our fortunes" and, sadly, Dartford were the ones to make that happen. In November 2017, The White Tigers also triumphed 3:1 at their ground in Truro.

Truro fans have faced a 180-mile round-trip to Plainmoor for home games, but playing games there has been popular with players - many of City's squad live in Devon and they train locally - and with opposing clubs. Now the situation has changed and realistically according to Jonathan Cox, representative of Helical Retail, work on a new stadium will not start until May 2019, therefore Truro City chairman Peter Masters is looking for the club to be back at Treyew Road this season, and for the groundshare with Torquay United to be back in place when work is due to begin.

Quote from PureDFC forum "The stewards were enforcing completely unnecessary segregation "rules" that were bordering on idiotic. They were personally escorting Dartford fans along the pitch one by one as we arrived, into the corner of the main stand. No standing was allowed and despite the freezing cold and the long and arduous journey, no tea bar facilities were provided in our area. They seemed surprised, firstly that we were there at all and secondly that having travelled so far, a cup of coffee might be nice. Eventually they came up with a contingency plan and agreed that anyone wanting a coffee could ask a steward and they would then be escorted around the pitch to a place where they could buy one. I've never seen anything so ridiculous at a football match. One of the stewards told me that they had to enforce these rules because it was a designated ground. Even if that is true, which I doubt, it doesn't make it any less stupid. At a game where the stadium was only about 1% full, anyone with half a brain would have just kept out of the way and let people get on with it. Fans were arriving in good spirits and the odds of any trouble were probably around 10,000 to 1, but nonsense like this just antagonises people and is more likely to CAUSE friction rather than prevent it. All in all, it was a miserable, very expensive and disappointing weekend." 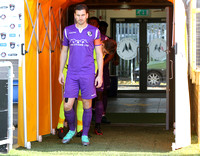 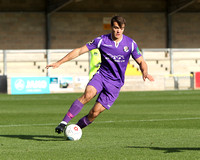 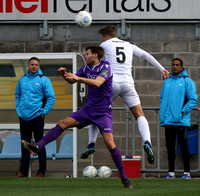