Dartford’s unbeaten league run came to an end, as they fell to a late own-goal at the hands of Dorking Wanderers at Meadowbank Stadium, Surrey on a cool Saturday afternoon. Despite starting quite well, it was Dan Wilks in the Dartford goal who proved to be the busier goalkeeper during the opening exchanges, as Marc White’s side set about frustrating the visitors. The goalkeeper saved well within five minutes to prevent Alfie Rutherford from opening the scoring, before Bobby-Joe Taylor also came close a few minutes later. However, Ade Azeez did come close early on as well, as his clever work forced a corner for the Darts. Unfortunately, the hosts were stubborn in defence and it would take until mid-way through the first-half before Steve King’s men should have taken the lead. The opportunity was initially created by Emmanuel Sonupe who, making his first league start of the season, raced down the right flank before delivering a delightful ball for Michael Kedman to connect with. And connect with it he did, only to see his strike deflected behind by a Wanderers defender. Jack Jebb took the resulting corner and Tom Bonner’s header was somehow cleared off the line (23). The Dorking goalkeeper, clearly beyond the 18 yard box blatantly handled the ball in clear view of the referee denying Michael Kedman a clear shot on goal. A red card offence, but referee Dean Skipper bottled the decision in front of 1000+ spectators.

This was a frustrating, yet entertaining first-half, with the game becoming stretched at times. The hosts were far more direct and quicker to the ball at times – a result of being used to the pitch, of which the Darts seemed to struggle on, especially when it came to their passing game. Two more opportunities arrived in quick succession for Dorking as, first Dan Gallagher missed the target (29), and then Rutherford did the same thing (31)! Wilks was then called into action to keep out Jimmy Muitt’s effort with forty-four minutes played to keep the score level, before Sonupe couldn’t find the target after excellent work from Kedman (45).

The beginning of the second-half saw Mr King make a change, as Danny Leonard replaced Kedman in an effort to be more successful in attack. And within four minutes, Ade Azeez was adjudged to have fouled Luke Moore and was shown the yellow card by referee Dean Skipper. He was having a busy afternoon, having already booked Matthew Briggs (24) and Kedman (40). Dan Wilks was then called into action again in the 51st minute, as he saved brilliantly from Luke Moore’s 25-yard free-kick, before he made a low save to keep out Niall McManus’ good effort (54). Ten minutes later saw one of the best moves of the game, and it came from the visitors. As Jack Jebb received the ball, he sent a beautiful lobbed pass over-the-top, which set up Azeez perfectly. Through one-on-one with goalkeeper Stuart Nelson, the Dartford number 14 sent a wonderful little lob over the goalkeeper as he rushed out, but the ball agonisingly hit the upright before rolling to safety.

Despite the hosts’ play-acting and time-wasting tactics, they did look more comfortable on the ball to be honest (when they weren’t rolling around crying “foul”), and they almost caught the Darts out with an excellent attack in the 70th minute. As the ball bounced favourably for Briggs, Tom Bonner was caught out and, knowing he was beaten for pace, intelligently brought down the wandering Wanderer, thus sacrificing himself by receiving a yellow card. Luke Moore, on the other hand, protested too much to Mr Skipper, wanting a sending off, only to see yellow himself! As Dartford continued to be frustrated by their hosts, Steve King brought on Dan Roberts for Emmanuel Sonupe (72), before going all-out attack as George Porter came on for Kieran Murtagh (86). However, two minutes previously, Dorking had edged their noses in front with a rather fortunate goal. And it was Matthew Briggs’ good work down the Dorking right flank that forced the issue. As his ball across the face of goal appeared to miss all his teammates, it somehow came off a Dartford defender and was bundled over the line (84). Dartford tried to respond, but there was very little time left, as Dorking became the first side to beat Steve King’s men in the National League South this campaign. The positive side is that Tom Bonner and Co still sit at the top of the league table, and they’ll look to return to winning ways when they travel to Concord Rangers on Tuesday evening. 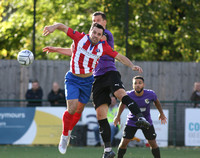 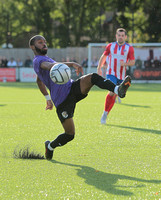 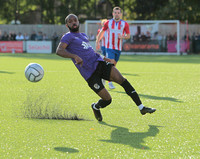 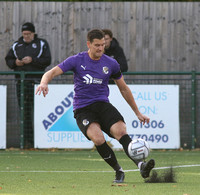 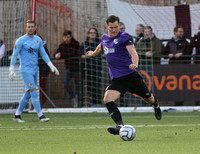