Created 4-Aug-19
73 photos
3 August 2019. First match of 2019-20 season. Overcast but hot and humid afternoon not far from RAF Northolt Aerodrome. Wealdstone’s Grosvenor Vale is one of those quirky grounds that seem to grow almost imperceptibly every time you visit. An added stand here; extra terracing there; a new tea bar; extended club shop; and oh, where did that electronic scoreboard spring from? But it's a ground absolutely cherished by the club’s supporters, who have completely renovated the place in the space of just six years - using entirely their own cash and skilled labour. In 2008 a number of Wealdstone directors took over the lease of Ruislip Manor Sports & Social Club in 2008, when its occupant Ruislip Manor FC folded, finally giving the Stones a permanent home at the tattered and peeling Grosvenor Vale Stadium. In just a few months the ground was spruced up, partly rebuilt. The ground is most notable for a unique feature in British football stadia: A towering concrete gun turret at its North East corner used to protect nearby Northolt Aerodrome from German bombing during World War II. Nowadays, although brightly painted in white & blue like the rest of the stadium, it is slightly overshadowed by the 'Couch Corner’ stand at that end of the ground, named after former club statistician Roy Couch, which is a section of covered terracing.

Not that its much comfort, but Hampton & Richmond and Hungerford also suffered a 4:1 defeat! 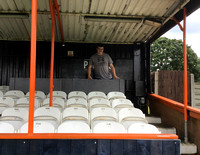 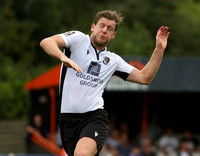 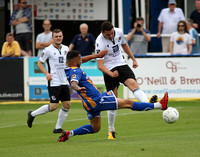 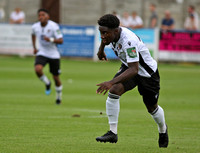 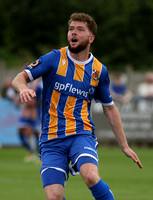