Dartford stretched their unbeaten run to eight games, as they demolished Welling United with a superb performance at Park View Road.

The visitors burst out of the blocks and were ahead within three minutes of the start, as a scintillating attack tore open the Welling defence with ease. Jordan Wynter started the move by playing a delightful ball to Luke Allen, who then played it towards Dan Roberts. With the defence scrambling hopelessly, the ball broke for Noor Husin, who simply couldn’t miss, and he smashed it home to net his second of the season. The hosts seemed hellbent on self-destructing, as Ade Azeez nicked the ball off of a defender far too easily in the 8th minute, only to shoot straight at goalkeeper Thomas Smith. The coaching staff in the home dugout had already seen enough two minutes later, as they dragged off a rightly disgruntled Charley O’Keefe and replaced him with Kamon-Sherell Assidjo… not that the switch made any difference, as the Darts tore them apart once again soon after. The move came on the right flank, as the explosive Danny Leonard raced away from his man, before delivering an inviting cross into the Welling box. Unfortunately, Dan Roberts’ header flew just wide of the upright (12).

The Wings began to claw their way back into the game and came close to levelling the score in the 16th minute. A rare attack resulted in the ball making it into the Dartford box and, with bodies scrambling everywhere, it fell to a Welling player who the home fans were certain would score. But, Luke Allen had other ideas, as he put his defensive duties to good effect by clearing the ball off the line. Then up stepped Ade Azeez to put on “the Azeez show”, as he first received the ball, controlled it well, and drove powerfully forward. Fending off the defender with strength, he then created space, but could only fire wide of the target (22). Not that the miss mattered, however, as the Dartford top scorer found the net two minute later. And it was another breath-taking attack that created the opening, which was started by Kieran Murtagh. He passed to Allen who, in turn, found Roberts out on the wing. Roberts then found Azeez in the danger area who confidently guided the ball into the net.

The hosts were well and truly having their wings clipped, as the Darts threatened to run riot. Two nil should have become three in the 35th minute, after the outstanding Husin treated everyone to some magic on the pitch before releasing Jernade Meade. The latter set up Allen with a perfect ball, but he couldn’t quite keep it below the crossbar. But… three minutes later Dartford scored a third anyway after more wonderful combination play during the build-up. Azeez held up the ball superbly before passing to Husin. Husin brushed aside his man before feeding the ball to Allen. Allen struck a sweet effort towards goal, but Thomas Smith made the save, only for Danny Leonard to send it beyond the goalkeeper and into the goal.

The second forty-five began with the Wings starting to probe their way forward, perhaps having had their Red Bull at half-time. Yet, besides having a little possession, Dan Wilks wasn’t threatened in the Dartford goal until the 65th minute when a curling drive was easily saved, such was the confidence and positioning of Tom Bonner’s defence. And, the Darts then struck another hammer blow in the 53rd minute to put any (im)possible comeback to bed. Once again, Husin was the instigator, as he played the ball to Roberts, who raced forward before passing it into the box, thus setting up Allen perfectly. The midfielder connected with the ball brilliantly to send it beyond the hapless Smith and into the bottom corner. Two minutes later saw Allen at it again, as he became the beneficiary of Roberts’ hard work. A terrific move saw the latter receive the ball on the left-flank, before he fired it into the danger area. Smith panicked and could only parry the ball, thus sending it into the path of the pouncing Allen, who fired it home delightfully.

With his team comfortably in control, manager Steve King introduced fresh pairs of legs after the hour, with Deshane Dalling replacing Danny Leonard and Dan Roberts leaving the pitch for George Porter (61). Luke Wanadio would then come on for Jordan Wynter in the 68th minute, before the visitors bagged their sixth goal of the game on 73 minutes. A foul was committed as the Darts launched another attack, and Luke Allen delivered a perfect free-kick towards the far post. And there was Ade Azeez to tap in his second goal of the game, his ninth of the season in all competitions. The Dartford number fourteen could have bagged his second hattrick in the space of a week two minutes later but, having received the ball from Allen, he just couldn’t quite direct his shot on target. Then, with the hosts having given up, Husin came close to adding a seventh with four minutes remaining, but having driven into the box and rounding Smith, too many defenders had managed to get back to clear his goal-bound effort. So, Dartford returned home with the Derby Day bragging rights, having demolished a lacklustre Welling side in a thorough lesson on how to play football. The Darts remain two points clear at the top of the National League South table, as their excellent form continues.
TEAMS
WELLING UTD: Thomas Smith, Aaron Barnes, Charley O’Keefe, Ade Shokunbi, Olumide Durojaiye ©, Afolabi Akinyemi, Kristian Campbell, Teddy Perkins, Dylan Pepe, Braley Stevenson, Ben Allen.
SUBSTITUTES: Chi Ezennolim, Mason Saunders-Henry, Kaylen Hinds, Che Krabbendam, Kamon-Sherell Assidjo.
DARTFORD: Dan Wilks, Jordan Wynter, Jernade Meade, Noor Husin, Connor Essam, Tom Bonner ©, Danny Leonard, Kieran Murtagh, Dan Roberts, Luke Allen, Ade Azeez.
SUBSTITUTES: Michael Kedman, Ronnie Vint, Deshane Dalling, George Porter, Luke Wanadio. 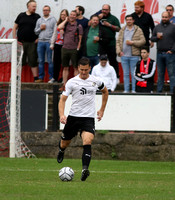 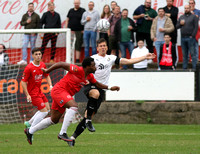 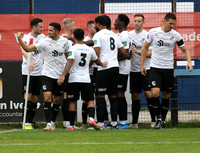 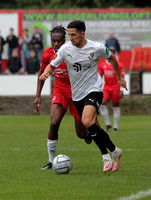 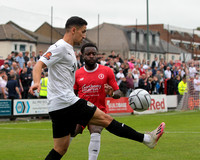 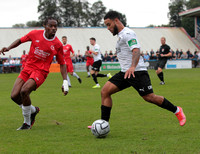