First match with new manager Steve King in charge, with assistant Craig Belgrove. King got the nod ahead of former Braintree manager Brad Quinton and ex-Wealdstone boss Bobby Wilkinson. Home and Away dugouts swapped. New signing Jordan Gibbons in the team as well as Billy Crook. Josh Hill designated Captain as Tom Bonner was on the bench and Charlie Sheringham is injured. Steve King arrives at Princes Park knowing how to embark on a F.A Cup run, he led Macclesfield Town to the fourth round six years ago losing to eventual winners Wigan Athletic. Dartford sadly missed their fifth first round appearance in seven years and a chance to play a Football League club.

Co-Chairman Steve Irving presented Ryan Hayes with this 450th Appearance trophy before the match got under way.

This weekend of FA Cup matches was marred by the news that Haringey Borough's FA Cup fourth qualifying round clash with Yeovil was abandoned after the home side walked off the pitch amid reports their goalkeeper was racially abused. Rhys Murphy was preparing to take a penalty for the visitors in the 64th minute when Yeovil fans appeared to throw objects at home goalkeeper Valery Douglas Pajetat. Murphy converted the spot-kick but tempers flared and the home side opted to walk off the pitch, with Pajetat said to be "visibly upset" as he alleged he was the subject of racist taunts and spat at by away fans. Not the sort of behaviour anyone wants to see in sport of any kind at any level. Mercifully, Kingstonian only left behind a huge amount of chopped up magazine pages as confetti, and hopefully a progression in the FA Cup leaving Dartford to concentrate their efforts on the league games ahead. 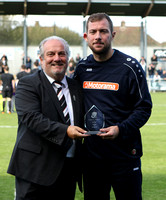 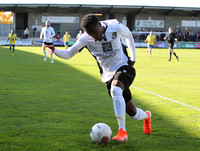 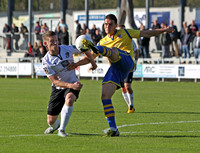 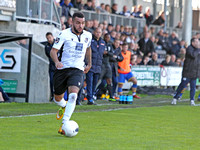 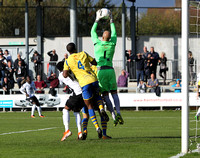