Created 30-Dec-18
91 photos
28 December 2018. 2:2 draw, with both teams down to 10 men at the end. Lee Noble sent off in the first half, Danny Harris (ex-Dartford) sent off at the end of the second half. Jamie Coyle, Co-Manager for Dartford sent off as well. I was left thinking it was a terrible pitch, with terrible light and a terrible referee. In fact, if we are going to get a referee out of a Christmas Cracker next year, to make sure the crackers come from a quality shop. Harsh? Maybe. Quoted from the twitter feed: "40' Unbelievable. Noble's been sent off", "85' Free kick to East Thurrock. Another questionable decision" and "84' Greenhalgh is booked for throwing the ball down." Ahem.

The dugouts have been replaced since I was there in 2016-17 season. The somewhat saucy mural on the back of the stand is still there, and photoed close up in sections. I get the distinct impression that the artist didn't intend for the ladies to wear bikinis as they look as if they were added quickly as an after-thought. And perhaps he wasn't very good at painting eyes, since most of the characters wear mafia-style dark glasses. 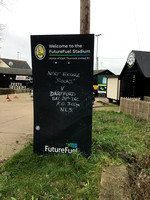 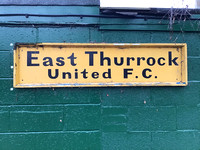 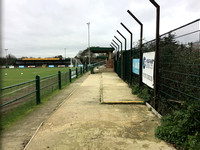 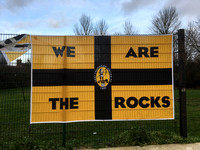 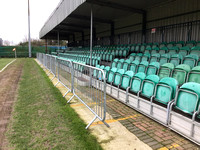