Dartford FC have taken just two points in their opening four games in their worst start to a campaign in five years. Meanwhile, newly promoted Weymouth have settled in the National South going unbeaten with two victories and two draws. Over the years, the Terras have often got the better of the Darts, but the last meeting between the two sides was almost 22 years ago. Victory for Dartford would have been the first triumph at the Dorset club since April 1990, but sadly not to be. Dartford last beat Weymouth 29 years ago winning 5-3 at Watling Street. 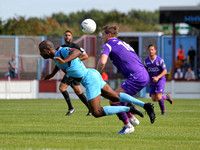