Dartford retained the Kent Senior Cup, after coming from behind at the break to beat an extremely competitive Folkestone Invicta side at Chatham Town’s Bauvill Stadium.
As the two sides prepared for the kick-off on a beautiful May evening in front of 496 supporters, it was a pleasure to see the return of Connor Essam. Having been sidelined due to an injury for some time, the defender took his place in the starting eleven alongside captain Tom Bonner. It was also pleasing to see the involvement of several Dartford Academy players in the Final, as Gabriel Duo, Jayden Boulton, and Ali Mansaray all started the game. On the substitute’s bench were a further five young academy talents. Louie Atkins came on for Danny Leonard and Harry Sargeant replaced Che Krabbendam towards the end of the match. 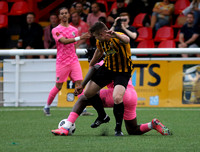