Dartford suffered a second consecutive defeat on the road, as Swindon Supermarine hit four goals to send Alan Dowson’s side crashing out of The Isuzu FA Trophy at the first attempt. As the Wiltshire temperature plummeted at The Webbswood Stadium, it was the visitors who actually created the first meaningful opportunity as early as the third minute. Luke Coulson was played through but, instead of pulling the trigger, opted to feed the ball to Charlie Sheringham instead… only for the Mat Liddiard-led defence clear the danger. Four minutes later saw the hosts serve up a warning shot, as an attack on their left-flank resulted with Zack Kotwica register the first shot on target… but it proved to be a routine save for Tom Wray between the Dartford sticks. However, that warning shot was followed by the hosts growing steadily in confidence, as they began to dominate the pitch. And, they were rewarded for the efforts when the excellent George Dowling fired them ahead with a delightful volley in the 15th minute. Swindon soon doubled their advantage when Dowling’s free-kick found its way past Wray after a foul had been awarded on the edge of the Dartford box (22). The hosts were dominant during the first-half and could have easily extended their lead. Kotwica forced Wray into an excellent save (31), before sending a free header over the crossbar before the break (45), as they threatened to over-run the visitors.

Dartford Manager, Alan Dowson, reacted by introducing Marvin Herschel and Davide Rodari for Josh Johnson and Pierre Fonkeu at the start of the second forty-five. However, it wasn’t long before Swindon added to Dartford’s misery. Another swift attack down the host’s left-flank saw Kotwica receive the pass, before curling a delicious drive beyond Wray (50). If that wasn’t game over, then it certainly was five minutes later… and Kotwica was involved once again, cutting the ball back to find Dowling 25-yards from goal. He connected with the ball perfectly to send a low drive into the back of the net to complete his hat-trick (55). Dartford responded via Luke Coulson, but the winger couldn’t keep his 67th-minute strike down, before leaving the field to be replaced by Samir Carruthers on the hour. The visitors began to apply a little pressure of their own from then on, as they managed to gain pockets of possession. However, they didn’t really test goalkeeper Liam Armstrong as both Charlie Sheringham (69) and Carruthers (78) failed to find the target in what was a disappointing afternoon in Wiltshire. Tom Bonner and crew will certainly be dusting themselves down and looking for a positive response on Tuesday evening, as Dartford play a third game in a row on the road, this time at Oxford City in the National League South. 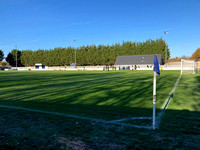 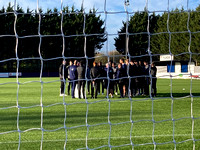 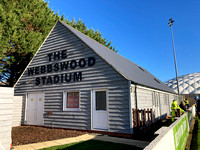 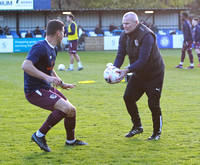 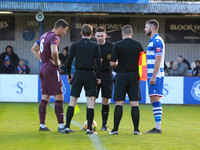