After registering a 3-1 victory over Carshalton Athletic FC in midweek, Dartford returned to hosting another League One side in their pre-season workouts on a much cooler afternoon.
Unlike the two previous encounters with League One opposition, the Darts secured a hard-fought victory courtesy of a superb George Porter strike in front of 868 supporters. With the visitors creating the bulk of goalscoring opportunities in a tight first forty-five, it was the hosts who went in at half-time with a 1-0 lead. The goal came in the 21st minute after good work from Steve King’s side, which resulted in Noor Husin collecting the ball. He then sent a brilliant pass out wide to George Porter, who cut inside from the left-flank and sent a beautiful curling effort into the top corner.
Besides the goal, the hosts found it difficult to break down a stubborn Wimbledon defence throughout the first-half. In fact, only Ade Azeez looked the most likely to do so before Porter’s goal. The striker beat the defenders to get himself on the end of Connor Essam’s pass in the fourth minute, only to be caught offside. Five minutes later saw him at it again, as he got through and looked odds-on to open the scoring. Unfortunately a superb, last-ditch tackle by Dan Csoka prevented Azeez from pulling the trigger. The only other meaningful opportunity for the hosts was created by Noor Husin as the game approached the 45th minute. Unfortunately, his excellent long-range cross narrowly missed the target as well as his teammates. As for the visitors, Nesta Guinness-Walker and Ethan Chislett combined well to force Craig King into a fine save with eleven minutes on the clock, before George Marsh sent an effort just wide a minute later. Connor Essam cleared a dangerous Chislett ball in the 25th minute, as the visitors pressed for an equaliser. Two minutes later saw the big defender make a superb clearance, as he put himself on the line (literally) and cleared a certain goal-bound effort!

The Darts started brightly in the second-half, and Ade Azeez almost doubled the score (47). After getting on the end of a good cross from Trialist #2, the Dartford number fourteen treated the crowd to some great skill, as he flicked the ball up into the air and pulled the trigger. His effort was met by an alert Nik Tzanev, who pulled off an excellent save to keep his team in the match. The Wimbledon goalkeeper was forced into action again, as he first made a routine save from a Dan Roberts effort, after the Dartford striker had breached the defence before shooting from inside the box (52). Then he was alert once again, this time to the danger of Jernade Meade’s 59th minute cross, gathering the ball before any Dartford player could reach it.

Manager Steve King was then forced into an early substitution, as Ade Azeez looked to be injured in a clash and was replaced by Samuel Odaudu in the 68th minute. Mr King followed this up with more changes soon after, with Noor Husin and Jack Jebb being replaced by Luke Allen and Tyrique Hyde (70).

Noor Husin… the midfielder looked fired-up for this game and was a force to be reckoned with in the Dartford engine room, as he helped his teammates to keep the Wimbledon attacking threat at bay. His example of perseverance could be summed up in a matter of minutes before being substituted for a rest – As one flying tackle was mistimed, leading to a free-kick (which ultimately came to nothing), another was timed to perfection, and halted a Wimbledon attack to the sounds of applause from the Princes Park faithful. After a string of substitutions, the visitors threw bodies forward, seaking an opening. But Tom Bonner and Co stood firm, and the Captain himself made an excellent clearance to prevent Ollie Palmer from getting on the end of a dangerous cross with fifteen minutes remaining. Two minutes previously saw Ben Heneghan get onto the end of Cheye Alexander’s free-kick. Thankfully, the former’s header landed harmlessly on the top of Craig King’s net.
In the 77th minute, the hosts made three more changes in personnel. Jernade Meade, Tom Bonner, and Connor Essam left the field, while Trialist #11, Josh Hill, and Ronnie Vint came on. It was particularly pleasing to see Vint returning to get a few valuable minutes after a long period of absence through injury.
Goalkeeper Tzanev was again called into action in the 79th minute, as he kept out Trialist #11’s good effort with an equally good save. Six minutes later saw George Porter walk off with an injury and Alfie Evans come on as his replacement. The substitute dug in to help his teammates pull together to keep an attacking Wimbledon at bay to preserve the win and clean sheet in what was another stern test for the Darts.
TEAMS:
DARTFORD: Craig King, Trialist #2, Jernade Meade, Noor Husin, Connor Essam, Tom Bonner ©, Jack Jebb, Kieran Murtagh, George Porter, Ade Azeez, Dan Roberts.
SUBSTITUTES: Tyrique Hyde, Trialist #11, Luke Allen, Dan Wilks, Josh Hill, Sam Odaudu, Alfie Evans, Ronnie Vint.
AFC WIMBLEDON: Nik Tzanev, Nesta Guinness-Walker, Dan Csoka, Ben Heneghan, Cheye Alexander, George Marsh, Ethan Chislett, Alyoub Assal, Ollie Palmer, Aaron Pressley, Alex Woodyard.
SUBSTITUTES: Jack Currie, James Matthews, Ethan Sutcliffe, Issac Ogundere, Kwaku Frimpong, Elliott Bolton, Jack Rudoni, Dylan Adjei-Hersey, Quaine Bartley, David Fisher.
By Chris Palmer 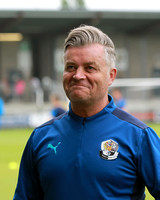 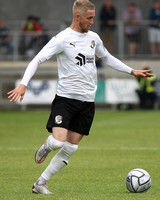 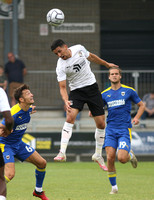 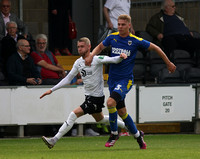 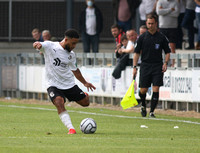 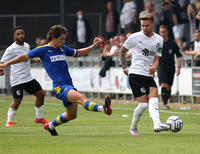