A brace from debutant Jordan Greenidge was enough to see off National League side Dover Athletic, as Dartford began their defence of the Kent Senior Cup with a victory in front of 267 supporters at Bericote Powerhouse Princes Park.
A rather cautious start by the hosts saw Dover Athletic create the first opportunity via left-back Marshall Wratten. As space opened up for him, he tried his luck from just outside the Dartford box, but his second minute effort curled high and wide of Dan Wilks’ goal.
As the game reached the tenth minute, though, the hosts began to control proceedings and, via the lively Danny Leonard, were a threat from then onwards. Leonard’s pace would get the better of Wratten on many occasions, as the hosts continued to turn the screw, and his first teasing cross occurred after 12 minutes, only for goalkeeper Josh Bexon to claim it.
Wratten was being tormented by the Dartford number seven and, after 17 minutes, seemingly floored him inside the penalty area. Unfortunately, referee Mr Kane Dempster didn’t agree and play continued. That was until the 20th minute! Jordan Greenidge, signed earlier today on loan from Weymouth until the end of the season, received the ball inside the Dover box. He then turned brilliantly before sending a delicious strike into the corner of Bexon’s goal.
Despite Dartford’s dominance, the visitors did create a couple of openings themselves, and their first real effort on target came via Luke Baptiste in the 25th minute, which Dan Wilks had covered. Four minutes later saw Djair Parfitt-Williams try his luck, but he failed to find the target.
The hosts responded with a great move involving Greenidge, who flicked the ball over Bexon in an effort to set up Tyrique Hyde, only for the goalkeeper to recover and beat Hyde to the ball (30). Four minutes later saw Leonard get the better of Wratten once again to then cut inside, only for some good defending from Will Moses to thwart his efforts. He was at it again in the 39th minute to send in another teasing ball, but Will Currie cleared the danger on that occasion.
For all their efforts and dominance, the Darts were still only one goal to the good, and Dover were always in with a shout. That shout arrived in the 41st minute via Baptiste, who forced a good save from Dan Wilks to ensure that the hosts went in at half-time with a deserved lead.
The beginning of the second forty-five saw Steve King make a change, as Jack Jebb replaced Che Krabbendam. And it was Dover who tried to create opportunities during the opening exchanges, only to be prevented by good defending from Kory Roberts (48) and then Jayden Sweeney (51), before another penalty shout was claimed by the hosts.
Once again it was Danny Leonard who was involved, as he was fouled inside the Dover box in the 54th minute. But, once again Mr Dempster ignored the protests! Thankfully, Leonard was alright and returned to the pitch two minutes later after receiving treatment.
Ade Azeez had the next Dartford opportunity, but fired wide from distance (57), before Greenidge got onto the end of a delightful cross from Sweeney, only to head the ball over the crossbar (68). The two combined again in the 74th minute, but the angle was just a little too tight for Greenidge to find the target with his low drive.
Not that the miss mattered though, as a minute later saw the 22-year old forward bag his second of the night. Gambling with his run, Bexon rushed out and Greenidge chipped the ball over the goalkeeper to mark his debut with an impressive brace.
The remaining two substitutions took place afterwards, as David Ijaha replaced Kieran Murtagh (77) and George Porter came on for Tyrique Hyde (83).
The visitors tried to claw their way back into the game in a move which almost paid off, as George Nikaj got the better of Jayden Sweeney, only to fire into the side-netting (86). They did pull a goal back a minute later, though after a little complacency in the midfield saw them win the ball back to set up Luke Baptiste, who pulled his side back into the game.
However, it wasn’t enough as the Darts saw out the remaining few minutes to secure a place in the next round of the Kent Senior Cup in a game in which the final score didn’t reflect their dominance throughout the ninety minutes.
DARTFORD: Dan Wilks, Kory Roberts, Jayden Sweeney, Tyrique Hyde, Connor Essam, Tom Bonner ©, Danny Leonard, Kieran Murtagh, Jordan Greenidge, Che Krabbendam, Ade Azeez.
SUBSTITUTES: Jack Jebb, David Ijaha, Kalvin Kalala, George Porter, Gabriel Duo.
DOVER ATHLETIC: Josh Bexon, Harrison Byford, Marshall Wratten, Flynn Toon, Will Moses, Will Currie, Kieran Agebebi, Harry Sikirwayi, Djair Parfitt-Williams, Luke Baptiste, Noah Carney.
SUBSTITUTES: Cameron Chamberlin, Sam Hignett, George Nikaj, Daniel Lott, Freddie Oliver.
Referee: Kane Dempster, Assists Billy Woods, Peter Conn. 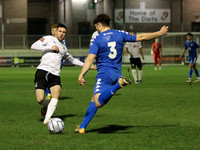 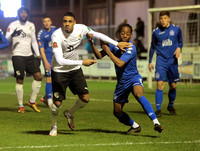 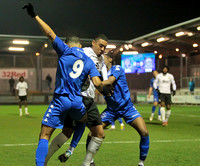 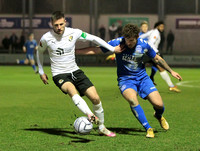 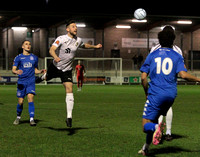