The goals came in each half from Ryan Trevitt and Nathan Young-Coombes in what was an incredibly mature performance from Neil MacFarlane’s young side as they came up against a team who are unbeaten at home this season.
The home side started fairly brightly in rainy conditions and they fashioned their first chance when Jake Robinson saw his low effort deflect wide for a corner which The Bees dealt with well.
Dom Jefferies had Brentford’s first sight of goal with a powerful effort from the edge of the box which was well blocked before Robinson looked to threaten again when he looked to dart past Nico Jones in the area but the young defender slid in to win the ball with expert timing.
The Dartford forward then had another attempt on 25 minutes when a low cross into the box from the right-hand side found him at the near post but his first time volley edged over the bar.
Just five minutes later Brentford were ahead in style and it came through Trevitt with a piece of individual brilliance. A long ball forward was nodded down by Dartford and the youngster picked it up from deep before driving towards goal and curling home from the edge of the box with his right foot.
Four minutes later it could have been two when the goal scorer broke down the left-hand side as he slid to maintain control of the ball before charging forwards and threading in Myles Peart-Harris, but he was denied by the onrushing goalkeeper Dan Wilks.
A couple more attempts fell for Jefferies towards the end of the half, the first which was well blocked, but the second a chance he perhaps will have felt he could have done better with as he charged in on goal from the right before shooting into the side netting from a tight angle.

The Bees started the second period brightly too when Tristan Crama rose highest to get on the end of a corner but his glancing header edged just the wrong side of the post. On 73 minutes the game could well have been out of sight for the hosts, who would soon be reduced to 10 men following an injury. Having already made their three changes they were unable to bring on a replacement for the final 15 minutes or so. That chance for Brentford fell for Daniel Oyegoke and it would have been a special goal. A wonderfully disguised pass from Peart-Harris caught out the Dartford back line and found the right back but he could only shoot wide of goal from a narrow angle on the right. 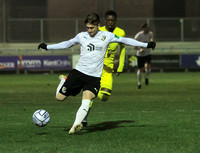 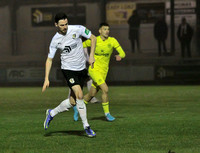 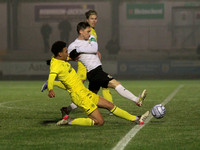 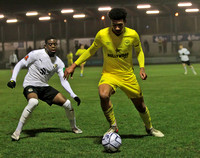