Dartford climbed above Ebbsfeet in National League South thanks to Jake Robinson's first-half winner. It meant back-to-back wins for the first time since the start of December for Steve King's men while the Fleet have now lost five out of their last six away league games - all against fellow promotion hopefuls. The two teams met only a month ago, Fleet getting bragging rights thanks to Ben Chapman’s late winner at Stonebridge Road. But the two sides had little resemblance from that day, Dartford making seven changes and the Fleet five to their line-up.

Among the Dartford changes was on-loan Altrincham forward Marcus Dinanga, who linked up well with Kai Innocent down the left and did a lot of defensive work to blunt the threat of Tobi Adebayo-Rowling.

At the other end, 24-year-old Dinanga also took on a couple of shots that called keeper Chris Haigh into action. Fleet again went for a back four, skipper Lee Martin coming into the line-up and setting up a chance that Elliott Romain - back at his former club - was unable to convert before shooting at keeper Dan Wilks himself from distance.
Darts took the lead on 21 minutes. Innocent delivered with quality from the left for Robinson, who saw his first effort saved by Haigh before converting the rebound via the post. It should have been 2-0 just five minutes later. Keiran Murtagh did tremendously well to pick out Danny Leonard from deep inside his own half and Leonard skipped past a defender as though he was not there. He unselfishly squared to present Robinson with a tap-in but the striker somehow dragged his shot wide to everyone’s amazement. Fleet’s best opening of the half came six minutes before the break, Craig Tanner playing in Greg Cundle but Wilks blocked his effort and Jordan Wynter was on hand to clear the danger.
Fleet fans wanted a more direct approach from their side but Romain was often a lone figure in attack and without the pace of Dominic Poleon it was largely comfortable for the home team to defend against.
It was no surprise Fleet boss Dennis Kutrieb turned to Poleon at the break and he nearly had an immediate impact.

Martin had already fluffed his lines in front of goal by the time Innocent conceded possession cheaply for the hosts and Adebayo-Rowling advanced down the right before crossing for Poleon, who somehow directed his header wide from close range when it seemed a certain equaliser.
Fleet lost Greg Cundle to injury before the hour mark and Fleet made all three changes afforded to them with over 20 minutes still left. It was a move that was to backfire wthe game with just 10 men.

Poleon had another chance that dropped inches wide of the far post and while Fleet lost their way badly in the second half at both Dorking and Maidstone in their last two away games which ended in big defeats, they were well and truly in this contest. Darts lost Murtagh and Leonard to injuries but they gave up only one late chance to Fleet when substitute Kieran Monlouis was unable to get his shot away in the area.
Referee Jack Packman, who had a good game in charge, indicated six minutes of stoppage time for the 10 men of Ebbsfleet to find an equaliser but Dartford kept them at bay to post a second derby win inside four days.

King certainly enjoyed the victory with his supporters as they maintained their unbeaten home record. “It was a fantastic atmosphere,” King added. “I always go and clap the fans after a game but I think it was the first time I’ve really got involved. “That’s what it’s about, if they can show us that then they can have a little jig at the end as well! “The crowd were fantastic, I always thought it would be over 2,000. It was a good atmosphere and we got the three points, but I haven’t got rose-tinted glasses and I know they missed a number of chances.” 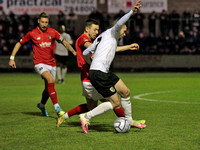 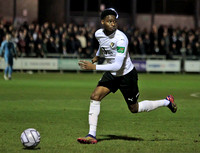 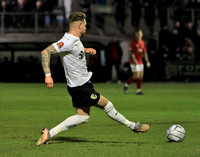 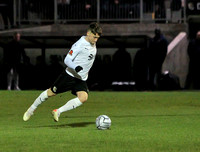 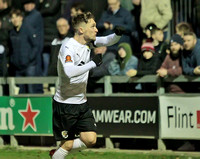