Dartford made their long-awaited London Senior Cup debut tonight with a first round home tie against Essex League club Athletic Newham.
Last season the Darts pulled out of the competition after their season was halted, but the cup did finally conclude in May. It is expected that this year’s edition of the London Senior Cup will provide Dartford with an extra opportunity to rotate their squad, now they have more depth than previous campaigns.
Goalkeeper Craig King has been limited to one game this term, whilst others like Luke Wanadio, George Porter, Luke Allen, Ronnie Vint have started less than half of the league matches so far. Steve King confirmed in an interview with Dartford FC TV last week he will use “players that need minutes”, he also said: “We’re going to get some third years in as well, one’s that are too old for the F.A Youth Cup game the following night”. Jake Robinson has been out with injury and will need more time to recover, Jordan Wynter is likely to be rested after playing with a groin strain over the last few matches and Jake Jebb missed Dartford’s last game after picking up an achilles injury.

Athletic Newham FC was founded in 2015 as a youth team, then known as Lopes Tavares London, before moving into adult football the following season, joining the Premier Division of the Essex Alliance Football League. They played at the Memorial Recreation Ground in West Ham. They finished eighth in their first season and fifth in 2017–18, before successfully applying to join the new Division One South of the Eastern Counties Football League for the 2018–19 season. On 27 August 2020, the club announced the renaming of the club to Athletic Newham. In 2021 the club were promoted to the Essex Senior League based on their results in the abandoned 2019–20 and 2020–21 seasons. Their badge bears a very similar appearance to Athletico Madrid, but there the resemblance ends. 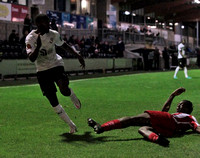