Dartford’s hopes of an FA Cup run came to a shuddering halt at the first hurdle, as Isthmian League Division One South East side Beckenham Town took the spoils in a frustrating game at Bericote Powerhouse Princes Park. After both sides had lined up, referee Mr Matthew Norton signalled a minute’s silence in honour of Her Majesty Queen Elizabeth II, which was humbly respected by the 674 supporters in attendance for this FA Cup Second Qualifying Round.

The Darts had striker Charlie Sheringham back in the starting eleven after a period out due to injury. They also had a new signing featuring on the substitute’s bench, having announced the signing of former Chelsea and West Ham youth player Daniel Jinadu earlier in the day. The former Nigerian U17 International goalkeeper has been signed from Barnsley on a free transfer.

The game started relatively evenly, but it was Beckenham who created the first opportunity when the ball ricocheted kindly for Alfie Bloomfield. Thankfully, his strike was blocked well by Maxwell Statham (2). The Darts responded immediately with an attack along the right-flank, but Samir Carruthers’ effort from distance failed to trouble goalkeeper Nick Blue (3).
The goalkeeper would then injure himself after punching Luke Coulson’s corner clear in the eighth minute, which required him needing lengthy treatment. And Connor Essam winced in pain but made light of his injury. Once play resumed, the visitors almost took the lead after Coulson lost out to Harvey Brand. The Beckenham right-back was subsequently through and, creating space for himself, shot straight at Joe Young (13). The visitors didn’t rue the miss for long though, because they were ahead a minute later. They were awarded a corner, which Freddie Nyhus sent towards the far post. Captain Danny Waldren got to the ball first with a scissor-kick, which Brand got on the end of to head home (15).

The hosts brought on Kristian Campbell for Jordan Wynter after the break, and that substitution would be followed by Davide Rodari replacing Adam Lovatt (55) and Kwaku Frimpong on for Pierre Fonkeu (64).
However, disaster struck Alan Dowson’s Dartford side after that final change in personnel, as Luke Coulson pulled up with an injury. The winger tried desperately to continue, but his efforts were in vain and Dartford had to finish the remainder of the game with ten men. With a minute of the ninety left, Kwaku Frimpong challenged Jaramaria Brissett with a late lunge. And, although the Dartford midfielder won the ball, he took his opponent out as well, leaving Mr Norton with no choice but to send the Dart off.
Match report: Chris Palmer 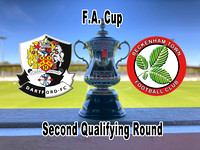