It was a fast start for the home side, controlling possession and getting an early goal through Tyrique Hyde (returning from loan) in the tenth minute, and welcoming new player Josh Clarke along with recent squad member D'Sean Theobalds.

The game slowed down after an early flood of chances for the Darts, with both sides fighting for possession in the middle of the pitch. This only lasted until the thirtieth minute though, when a Cockfosters player put the ball into the back of their own net due to the Dartford cross into the box being whipped in with pace. Quick-fire Darts made it three just a minute later, with D’Sean Theobalds firing the ball into the back of the net. Emmanuel Sonupe gave Dartford the four goal lead at the break, striking the ball into the top left corner on the fourty-fifth minute.

It only took four minutes into the second-half for the home side to get their fifth, with Essam heading home a Leonard corner. Dartford hit quick-fire mode again, with Sonupe getting his second just a minute later; knocking the ball past a helpless Adam Seymour. The ex-Spurs academy player Sonupe got this hat-trick on the fifty-sixth minute, making it seven goals to nill in just under an hour. Jake Robinson got his customary goal upon his return, heading in a Sonupe cross ten minutes later. Substitute Dan Roberts scored in the eighty-fifth minute to make it nine after missing a header just minutes before.

Dartford will face either Corinthian Casuals/Harrow Borough v Brentford, depending on the outcome of those matches, sometime in the New Year. 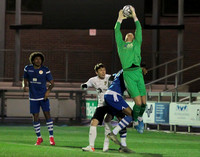 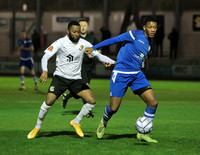 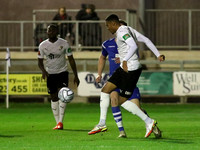