Dartford followed up their midweek 5-2 victory over Athletic Newham in the London Senior Cup with victory in the 3rd Qualifying Round of the FA Cup in appalling weather at the Gallagher Stadium. The magnitude of this Kent derby certainly wasn’t lost on either side, as both took part in a fiercely competitive game whilst trying to battle against the weather.

Yet, it was the Darts that came away with a three goal win after another excellent and organised performance. As the temperature plummeted and the wind and rain increased, the tie kicked-off to the sounds of both sets of fans in full-voice. However the referee, Richie Watkins, appeared to lose sense of the occasion and booked Dartford’s Jordan Wynter within eight minutes. Not only was it the defender’s first challenge, it appeared that he’d actually won the ball as well! Yet, despite the fact that he’d now be walking the proverbial tightrope for the rest of the match, Wynter looked undeterred by the card and would be virtually solid for the remainder of the afternoon. The opening exchanges between the two sides were close, with neither prepared to give an inch. However, it was the visitors who created the first real opportunity in the 22nd minute. It was Luke Allen who, fresh from scoring a brace at Welling last weekend, received the ball before dancing through the Maidstone defence and pulling the trigger. Unfortunately, his effort was saved by goalkeeper Tom Hadler.

The game was beginning to show signs of opening up more, and the hosts created an opportunity themselves three minutes later. However, the aptly named Regan Booty booted over Craig King’s crossbar, before Ade Azeez hit the side-netting after excellent attacking play from the Darts (27). Another lightning fast attack saw Jernade Meade sprinting down the left-flank before sending in a delightfully tempting ball across the face of goal. However, the Maidstone defence was able to clear the danger (31). With the game teetering on the edge, captain Tom Bonner stood firm to clear a Maidstone corner on 33 minutes, before a swift attack saw George Porter fouled within crossing distance. With everyone expecting a cross into the box, the ball was laid off to Noor Husin, who had other ideas. He struck an absolute beauty, which flew low, before curling wonderfully beyond Hadler. (38).

The hosts were stunned and should have been two behind at the break after excellent work from Azeez in the 45th minute. Using a combination of strength and skill, the striker spun and shot from distance, only for Hadler to pull off a good save. If Dartford thought they had control of the game at half-time, they more-or-less made sure of it five minutes into the second forty-five. As Husin collected the ball, he launched it long upfield, where George Porter received it. The latter picked out Danny Leonard (who was in space in the box), who subsequently slotted the ball home to double the visitor’s advantage.
Maidstone responded, but Bonner was there again to thwart Christie Pattisson with a superb defensive block, after the Maidstone player had found himself through on goal (55). Dartford kept on coming and came close twice when Meade was put through after great combination play between Porter and Husin. Unfortunately, the left-back hit the side-netting (67), before Azeez forced an excellent save from Hadler. (72). The Dartford faithful needn’t have rued those missed opportunities though because, five minutes later saw Steve King’s side put the game out of reach. The goal came after another signature counter-attack of this prolific Dartford side. Danny Leonard raced down the right-flank, slipped the ball to Porter who, visually alert, awaited the arrival of Husin. Once the latter had got the ball, he sent it across the face of goal, where Azeez arrived to tap it home. The goal was the striker’s tenth of the season in all competitions!

With the tie in the bag and his team comfortably in charge, Steve King then introduced some fresh legs, as Dan Roberts replaced George Porter (77), Ronnie Vint replaced Tom Bonner (82), and Emmanuel Sonupe came on for Danny Leonard (86), before Azeez had a second goal chalked off for being a little too eager, thus triggering the offside flag with barely two minutes remaining. As the Darts were purring, the hosts were growing increasingly frustrated at not being able to breach the opposition’s defence, let alone beat goalkeeper Craig King. That frustration finally boiled over as we reached the 90th minute when Joan Luque, who’d looked a little lively in the early moments, lost control and flew into a Dartford player with studs showing. Mr Watkins had no hesitation in showing him a straight red card for serious foul play, and he left the pitch to the sounds of 500+ Dartford fans cheering. So Dartford cruised into the next qualifying round of this 150th edition of the FA Cup while continuing their impressive unbeaten run. Special mention must go to all the travelling Darts’ fans, who braved the appalling weather conditions to sing and support the players from beginning to end. The atmosphere was electric all afternoon… Without the fans, football certainly is nothing! 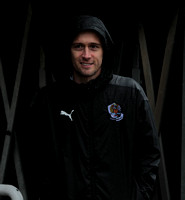 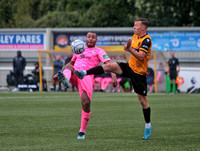 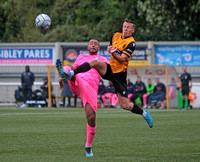 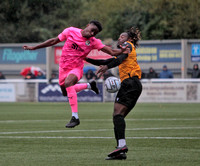 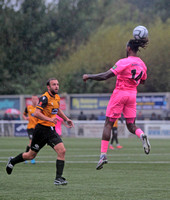