Created 26-Oct-21
67 photos
25 October 2021. A 2-hour traffic-jammed trip, a late kick off, a frustrating match for Dartford who threw everything but the kitchen sink at Chelmsford, and thrawted by a parked bus in the second half, resulting in a 0:0 draw which maintains Dartford top of the table position.

Dartford returned to National League South action on a cold Monday, as they took on Chelmsford City at The EMG Inspire Stadium in what proved to be a frustrating night for the visitors. The Darts started well and looked relatively comfortable when on the ball. However, it was the hosts that created the first real opportunity when former Dart, Charlie Sheringham, breached the defence to chase a long ball over-the-top, only for goalkeeper Dan Wilks to deal with the danger. That was the only real opportunity during the opening exchanges, as the ball seemed to be stuck in the midfield areas, with neither side able to assert any authority on proceedings. Dartford did, however, create an opening with 28 minutes on the clock when Jack Jebb found Ade Azeez in a great position. Unfortunately, the top-scorer couldn’t find the target with his header.

Eight minutes later saw George Porter latch onto a terrific ball and race away. But, just as he reached the D of the Clarets’ box, Tom Dickens made a last-ditch challenge, fouling the forward when he was one-on-one with Jacob Marsden in the Chelmsford goal. Referee, Jack Packman, issued Dickens with his marching orders following a red card, and the hosts were down to ten men. The hosts’ defensive wall blocked Jebb’s subsequent free-kick, then the resulting corner was cleared. Dartford sensed blood and turned up the heat, while Chelmsford had their backs to the wall, defending for their lives. Jebb tried his luck with a long-range drive in the 41st minute, but Cameron James headed the ball to safety as the hosts got to half-time level. There was, however, more controversy before the break when goalkeeper Marsden was booked for time-wasting after he’d instructed Adebola Oluwo to move the ball before taking a goal-kick. Seemingly outraged by the decision, Clarets boss Robbie Simpson was also shown a yellow for being too vocal about Mr Packman’s decision.

As the second forty-five got under way, the host’s tactics were obvious, as they sat back with two banks of four in order to prevent the Darts from scoring. And that, together with their consistent time-wasting tactics, made for a frustrating second-half for Steve King’s men. The visitors were awarded a free-kick on the edge of the Clarets’ box, whereby Adam Morgan was booked for protesting too much. Jebb’s subsequent 52nd minute set-piece was heading for the top corner… until Marsden made a superb save to tip the ball onto the crossbar! At this point, Chelmsford were on the ropes, but the Darts just couldn’t break them down. On the occasions when they did get into good positions, they failed to find the target, or were thwarted by a determined defence and goalkeeper. Manager, Steve King, introduced fresh legs in an attempt to secure the three points, as Dan Roberts replaced George Porter (64), Luke Allen replaced Kieran Murtagh (69), and Emmanuel Sonupe came on for Noor Husin (77). And, they came close with ten minutes remaining, when Danny Leonard sent a fearsome drive across the goal-line, but nobody could reach it! Leonard would test the Chelmsford defence again five minutes later, but his strike smacked a defender in the face before bouncing to safety. Then the unthinkable almost happened with seconds remaining, as the hosts almost nicked all three points from nothing. But, Sheringham’s effort from a tight angle was excellently saved by Dan Wilks.

Thus, a frustrating night for Dartford came to an end as Chelmsford held on to earn a point in this virtually one-sided stalemate. On a positive note, Dartford remain unbeaten and at the top of the National League South table, and will look to continue that run on Saturday away at Dorking Wanderers. 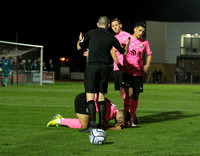 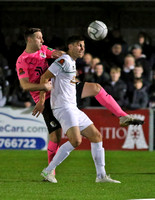