Samir Carruthers created the opportunity for Dartford's first goal, as he collected the ball and drove forwards before feeding Joshua Johnson with a neat pass. The loanee received it gratefully, created space for himself on the edge of the box, and fired a delightful strike into the bottom corner (14). In the second half a Dartford attack saw the Terras overflow into the box, resulting in a handball offense by a panicking Terra inside his own area. The referee, Mr Aaron Farmer awarded the penalty, and up-stepped Alex Wall to convert confidently (74). Then Alex Wall received the ball after a wayward Ben Gerring pass was intercepted, before forcing a good save out of Zaki Oualah with ten minutes remaining. But Alex Wall was not finished. The Weymouth goalkeeper wouldn’t be so fortunate next time though, as an excellent attacking move saw Fonkeu race into the box and find Wall with a brilliant pass. The super-sub then fired his second of the afternoon beyond Oualah and into the back of the net to secure the three points. Tom Bonner and team registered an emphatic victory over The Terras for the first time in 32 years. 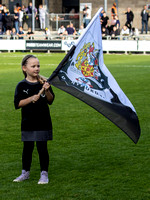 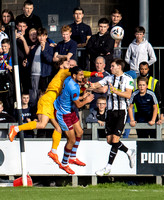 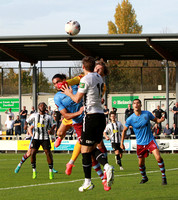