Dartford fell to a fourth defeat of the season, after a tale of the free-kicks saw Chippenham take the points in front of 547 supporters in a game that neither side deserved to lose. Dartford manager, Alan Dowson, made a change for the long trip to Hardenhuish Park, as Dan Roberts came in to the starting eleven in place of Luke Coulson. The winger was on the substitute’s bench for this one, alongside the returning Charlie Sheringham and Alex Wall. Midfielder Samir Carruthers was also a substitute, after having to come off with a knock after scoring twice at Hemel Hempstead on Monday.
The start was a very even affair, but it was the Darts who created the first meaningful opportunity after nine minutes. Keiran Murtagh found Dan Roberts with a delightful ball, and the Dartford number 17 was through. He managed to get round goalkeeper Will Henry, but just got a little too much on the ball, which sent his strike off of the crossbar. The Darts came forward once again after 29 minutes, and Luke Allen tried his luck from close-range, only for Henry to deflect the ball to safety. However, Alan Dowson’s side edged their noses in front ten minutes later. The goal came after a corner, which was headed back into the danger area by Connor Essam. The ball met the head of the towering Maxwell Statham, who sent the ball into the back of the net to open his account for the season.

With the visitors seemingly in control, the Bluebirds found Alefe D’Abadia with a long-ball, and as he raced into the box, he collided with Jordan Wynter. The referee, Mr Ross Martin, pointed to the spot, and D’Abadia dusted himself down before fortune favoured his spot-kick… for it looked as though Joe Young had made the save, but Mr Martin gave the benefit of the doubt to D’Abadia, and the score was level.
As play resumed in the second forty-five, it was as you were in terms of tightness on the pitch, until seven minutes in at least! A terrific ball released Dan Roberts once again and he was almost one-on-one with Henry, before Will King made a timely interception to clear the danger. The game went into a period of entertaining midfield cat-and-mouse play soon after, as neither side wanted to give an inch. After 64 minutes, Alan Dowson made a triple substitution in a bid to change formation and try to get that vital second goal. Luke Coulson, Charlie Sheringham, and Alex Wall all came on to replace Keiran Murtagh, Pierre Fonkeu, and Dan Roberts respectively.

As the clock continued to count down, the game looked to be heading towards a deserved stalemate. That was until we reached the tale of the two free-kicks…! First on the scene was Alex Wall, who received a great ball from Luke Coulson, which left him charging through towards the Chippenham goal. However, a late lunge by Luke Russe on the edge of the box saw the Darts awarded a free-kick. Russe was booked and up stepped Kristian Campbell, but his curling drive flew narrowly over Will Henry’s crossbar (79). Meanwhile, at the other end, a forward run by Jordan Young was abruptly ended by a late challenge by Maxwell Statham. The Dartford player was subsequently booked for the foul, and Young duly sent the free-kick beyond Joe Young and into the back of the net to nick the points late in the game (90). 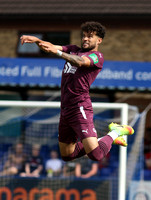 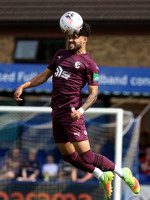 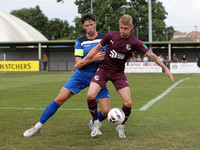 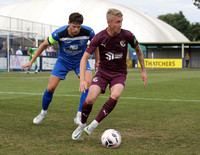 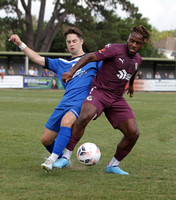 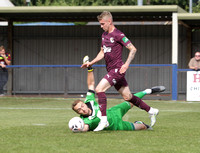