Jake Robinson's seventh goal of the season ensured Dartford's home record remained intact at a rain-soaked Princes Park on Saturday. But the hosts probably felt they did enough to earn all three points against a Dulwich side who started the day one place below them in National League South.
The game was delayed by five minutes to allow groundsman Jay Berkhauer extra time to clear some of the heavy rain which arrived after the teams finished their warm-up.

Given the wet conditions, referee Ben Atkinson surprisingly booked Jack Jebb for a sliding tackle as early as the seventh minute. It was a decision that seemed a mockery on 15 minutes when the official failed to book Dulwich’s Deon Moore. Injured, he walked towards the away dugout before going down five yards from the touchline. After receiving treatment he was up again but went to the ground as he walked off with the physio, allowing his replacement extra time to get ready.
The official seemed oblivious to the delay, and at the next stoppage in play substitute Reise Allassani joined the play, although that also took a long time to happen.
By then, Dulwich had found the breakthrough. A right-wing corner was nodded down on 13 minutes by Jack Holland Tyrone Sterling found enough space six yards from goal to turn the ball beyond keeper Dan Wilks.

Dulwich’s Giovanni McGregor shot over after good work by Chike Kandi but it was Dartford who had more of the play as the rain relented midway through the half.
Darts boss Steve King was booked for dissent by the referee after he made it known that the officials missed (for several minutes while the play continued) a foul on Kalvin Kalala by Quade Taylor. Noor Husin, having already been warned by the official for dissent, quickly followed into the notepad for a foul - the referee then showing his inconsistency two minutes later when Tom Bonner escaped without a caution for a late challenge.

Husin showed good feet to work space for himself on the edge of the area but whistled a right-foot shot inches wide of the upright.
Dulwich’s Jordan Higgs picked up a yellow card for hauling down Ade Azeez, who was restored to the starting line-up. Dartford seemed reluctant to cross the ball in the first half, but they were given an indication that it could be a prosperous way to go in stoppage time when Josh Clarke’s centre was met by Jake Robinson and keeper Charlie Grainger had to parry his near-post effort. Dulwich nearly added a second 10 minutes after the break but Taylor’s header was deflected wide at the near post from a McGregor corner. Dartford’s message at half-time to get the ball more was evident. One deep cross was nodded down by Bonner for Azeez but Grainger did well to keep it out at close range.

The game's key moments arrived on 72 minutes when Dulwich had a penalty appeal turned down and Darts immediately went down the other end to equalise. Connor Essam was caught out by Allassani who went into the box before going down as Essam chased back. Referee Atkinson didn’t point to the spot but also opted against a yellow card for diving. Play went straight to the other end and Dulwich left Robinson unmarked at the far post, paying the ultimate price as he headed the ball in at the second attempt after Grainger did brilliantly to keep out his first effort. The Darts nearly went ahead with eight minutes left, Grainger fumbling the ball to Robinson, whose shot was saved before Essam somehow turned it wide from close range.
Keeper Dan Wilks then produced a moment of brilliance on 84 minutes to turn McGregor’s deflected left-foot shot wide when he looked to have been wrong-footed.
Driving rain arrived for the final five minutes but Dulwich successfully saw out five minutes of stoppage time to leave with a point. 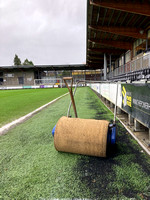 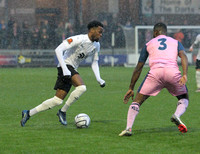 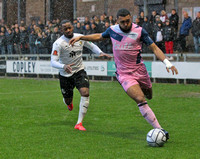 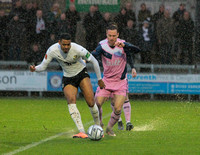 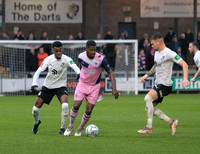