Captain Tom Bonner reached the 300 appearance milestone and walked out with young son as a mascot.

Dartford stretched their unbeaten home run in the National South to ten this weekend when they hosted relegation threatened Truro City. It’s normally a fixture that guarantees goals with the last six meetings producing almost five a game. Earlier in the season the Darts were on the receiving end of a 3-1 defeat in front of just 87 spectators at Plainmoor in Torquay, a repeat of the score line from the campaign before. The White Tigers enjoyed a 12-minute spell at the end of the first half which resulted in three unanswered goals, to the dismay of goalkeeper Bailey Vose making his second debut for the Darts. Tyler Harvey arrived at the far post to score the first, then added a second a minute before the break and Nick Grimes increased Truro City’s advantage in first half stoppage time. Dartford’s consolation came in the final minute when substitute Kudus Oyenuga headed past Corey Harvey. 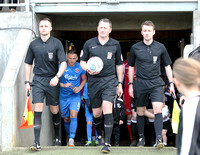 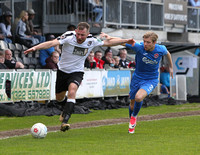 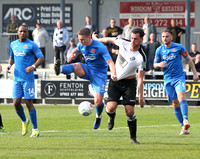 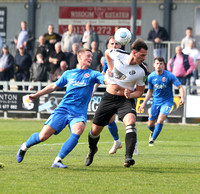