Created 16-Jan-22
60 photos
15 January 2022. Dartford win 1:0 (Jack Jebb 15') to beat National League side Weymouth in the FA Trophy and progress to the next round despite some questionable decisions by the referee.

All pictures by Peter White.

A first-half beauty from Jack Jebb and a Man of The Match performance by Dan Wilks ensured that Dartford went into the next round of the Buildbase FA Trophy, after seeing off National League side Weymouth at Bericote Powerhouse Princes Park. Despite the visitors settling into a rhythm early on, it was the Darts who created the first goal-scoring opportunity as early as the eighth minute. Josh Clarke and Kalvin Kalala combined well to race along the right-flank, before the former whipped a delightful cross into the box. With the Weymouth defence missing in action, Ade Azeez received two bites of the proverbial cherry, forcing goalkeeper Ross Fitzsimmons into an excellent double save, before Jake Robinson saw his well-placed strike blocked!

By this point, the hosts had settled themselves, as they ventured forward with pace before forcing two fouls in quick succession. The first saw midfield general Noor Husin having to receive treatment, while the second earned the Darts a free-kick in Jebb territory. Unfortunately, the midfielder’s twelfth minute set-piece was blocked by a determined Weymouth wall and the danger cleared. The Terras created an opening themselves when Jordan Greenidge’s header set up Brandon Goodship in the 14th minute, only for the latter to fail to test goalkeeper Dan Wilks. The hosts were immediately on the front-foot, as they raced forward along the left-flank. The ball eventually found Jebb in space, who struck it first-time, and watched as it whistled into the bottom corner, leaving Fitzsimmons with no chance.
Steve King’s side were purring by this point, as they set about putting the game out of site. The passing when in possession was excellent, as was movement on and off the ball. When the play was switched, both full-backs looked dangerous, as Josh Clarke and Kai Woollard-Innocent (making his debut since joining on loan from QPR) threatened to overwhelm their opponents. Clarke was certainly enjoying the game and almost set-up Jake Robinson with another delightful cross in the 28th minute, but the striker was unable to reach it in time. The number nine was looking lively as well and had seen another effort blocked previously (19), before being gifted a golden opportunity by a Fitzsimmons’ stray pass, only to see his long-range lobb sail wide (33). With the hosts dominating the ball, Ade Azeez then got in on the action when he got on the end of Jebb’s delicious delivery, only to power his header just over Fitzsimmons’ crossbar in the 37th minute. That seemed to spark the Terras back into life once again, as they seeked an equaliser. Sean Shields tried to create an opening, but Dan Wilks reacted swiftly to collect the ball (38), before Josh McQuoid tried setting up Greenidge a minute later, only for Wilks to intervene again. However, Shields and McQuoid combined again in the 42nd minute and, on this occasion, the latter struck the ball towards goal, only for Wilks to dive down and make a fine save. The Darts counter-attacked swiftly, catching the Weymouth defence napping, and Robinson placed the ball into the back of the net. However, referee Mr Lloyd Wood, claimed that the striker had moved too soon and ruled the goal out for offside!

The second forty-five saw the visitors determined to pull themselves back into the game, but it was Jack Jebb who came agonisingly close to doubling his team’s lead in the 55th minute. His wonderful curling drive forced Fitzsimmons into an excellent save, which prevented the ball from ending up in the top corner. Meanwhile, at the other end, Dan Wilks was putting on an excellent display in the art of goalkeeping. First he rushed out to palm away Shields’ dangerous ball towards Greenidge (52), before making a superb save to keep Greenidge’s 60th minute strike from going in. He wasn’t finished there though, as he stepped up to prevent a Tyler Cordner header from going in seconds later. The Man of The Match would then go on to thwart Shields’ 81st minute effort, before catching an Andy Robinson strike with ease a minute later. Further saves from Goodship (84) and a Cordner free header (88) occurred, as Wilks commanded his box with a towering presence. There was action elsewhere, however, some of which involved the man in the middle, Mr Wood! One challenge too many saw Noor Husin having to leave the field. His replacement was Jordan Wynter (63), who was the first of Steve King’s changes. The others being Ronnie Vint on for Kalvin Kalala (76) and George Porter on for Jake Robinson (78).
It was at this stage of the game where Mr Wood appeared to be completely oblivious to any Terra challenge, yet penalised Dartford for any tiny infringement! The 725 supporters were shocked and infuriated when the referee failed to award a free-kick when Jebb was hacked down just outside the Weymouth box (70). Yet tempers increased even more when Azeez was penalised for a harmless challenge (74). Ironically, both Azeez and Steve King were then booked by Mr Wood, which was laughable to be honest.

The controversy didn’t end there though, as Porter and Azeez combined well during the latter stages, particularly in the 85th minute. Porter set up his strike partner with a lovely flick, Azeez tucked the ball home, but Mr Wood disallowed the goal for offside! Both Woollard-Innocent and Vint would also be booked by the referee, joining those already mentioned as well as Husin (who’d seen yellow in the first-half), but the Darts stood firm to see off the Terras. So, Dartford go into the hat for the next round thanks to an outstanding display between the sticks from Dan Wilks, in a hard-fought victory capped by another Jack Jebb special. 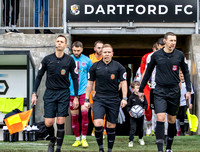 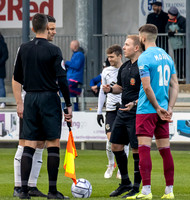 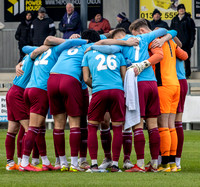 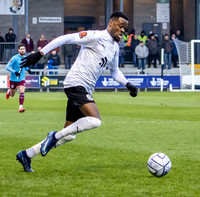 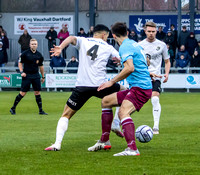 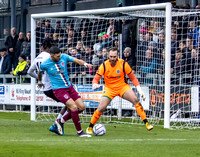 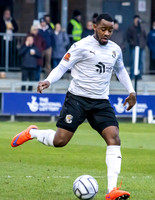 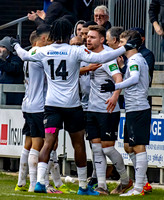 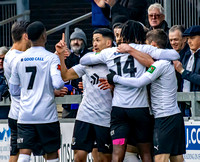 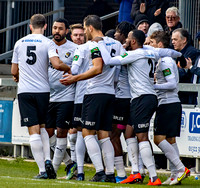