The hosts had a goal ruled out for offside in the ninth minute, Oyenuga appeared to convert Greenhalgh's cross but the flag went up against Elliot Bradbrook. Jamie Coyle said after the match “It looked like there was only going to be one team in it. We had a goal chalked off because the linesman thought it was someone else who scored. They apologised after the game and fortunately for us it didn’t have an impact on the result.”


Seven minutes before the break Darts had a penalty appeal turned down when Lee Burns directed behind Callum Driver's cross for a corner, Bradbrook led the appeals that it came off his arm but the assistant claimed the ball hit Burns' chest. East Thurrock were awarded a golden chance to level the scores just three minutes later from one of the few times they ventured into Dartford's half. Freddy Moncur's ball into the box hit was handled but skipper Sam Higgins opted for power instead of precision from the resulting penalty and keeper Deren Ibrahim made a fine save with his legs. It mattered little, however, as Dartford scored from the resulting corner. Keeper Giddens flapped at Greenhalgh's delivery and the ball fell invitingly for skipper Bonner to emphatically fire home from close range.

Darts added a second goal on 73 minutes when Noble delivered an inch-perfect right-wing cross for Greenhalgh to nod in at the far post. 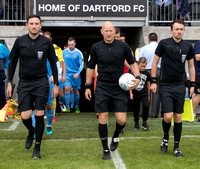 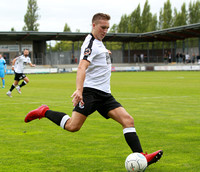 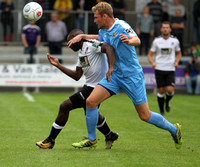