Created 17-Oct-21
120 photos
16 October 2021. AFC Sudbury win 3:1 as
Dartford's FA Cup run came to an abrupt end in the second half at AFC Sudbury on Saturday. Jack Jebb's stunning strike put the Darts in control but skipper Tom Bonner saw red in a dreadful second half which saw Isthmian North Sudbury score three goals to book their place in the first round.

Dartford’s unbeaten run came crashing to a halt, as a stubborn AFC Sudbury side scored three second-half goals to knock them out of the FA Cup at The MEL Group Stadium.
The writing appeared to be already written on the wall during a frustrating first forty-five, which saw the visitors dominate in possession for long periods. And, when they did get into promising positions, they came across an inspired Joshua Blunkell between the Studs’ sticks.
When Steve King’s men did find the target, the goalkeeper was there to thwart them. His first save came in the ninth minute from a Danny Leonard effort, before a combination of the goalkeeper and defence cleared a bombardment of crosses and opportunities from the visitors.
The longer the half went on, the more the hosts grew into the game. And they came close in the sixteenth minute when an excellent cross was headed just over Craig King’s crossbar by George Keys. As confidence grew, the spectacular was attempted, but King had the cheeky long-distance lob covered (27).
However, the tide seemed to turn with just over ten minutes before half-time, and Dartford got a firm grip on the game. As the midfield trio of Jack Jebb, Luke Allen, and Noor Husin began twisting the screw, the latter played in Dan Roberts with a great ball (37), but the stubborn Sudbury defence held firm.
That defence was breached as we reached stoppage time at the end of the half, and it was Allen who got through as he danced his way into the box. The midfielder got the shot off, but Blunkell made the save, but could only palm it back into the danger area where havoc ensued. The ball eventually fell to Jebb who was standing thirty yards from goal. Using wonderful technique, the midfielder sent an absolute beauty racing into the back of the net, leaving Blunkell with no chance.

If Sudbury were stunned, they certainly didn’t show it as the second-half kicked-off. And, within five minutes the hosts were level. A terrific run involving Shane Temple resulted in Tom Bonner committing, and the Sudbury striker going down in a dangerous position. The referee, Oliver McKay, issued the Dartford captain with a yellow card and up stepped Reese Harris to equalise with a thunderous free-kick, which cannoned off the underside of the crossbar. With 62 minutes on the clock, proceedings took a dramatic twist after Bonner was adjudged to have fouled his man again. He received a second yellow card and his marching orders and, a minute later, the Darts were a goal behind after Shane Temple scored the third excellent goal in this game!

Manager, Steve King, responded by changing his personnel in an attempt to alter his tactics and rescue the tie. Dan Roberts was the first, as he was replaced by Josh Hill (65), before George Porter replaced Danny Leonard (67), and Emmanuel Sonupe replaced Jordan Wynter (76).
Then it was all hands to the pump, as the visitors ploughed forward seeking an equaliser. And, they were almost rewarded for their efforts with two minutes remaining, when Jernade Meade sent a deliciously teasing ball into the box. Connor Essam rose high to connect with it, but Blunkell was there to make an excellent save. Unfortunately, with all bodies getting forward, the inevitable happened. A quick break from Sudbury saw Lewis O’Malley get through, and he raced clear to slot the ball beyond Craig King in injury time and, thus, clinch the tie and a place in the FA Cup 1st Round.
TEAMS
AFC Sudbury: Blunkell, Keys, Harris, Turner, Grimwood, O'Malley, Nyadzayo (Stokes 79mins), Frimpong, Shaw, Temple (Gilchrist 73mins), Andrews (Hipkin 90+6mins). Subs not used: Girling, Askew, Smith.
Dartford: King, Wynter (Sonupe 76mins), Meade, Husin, Essam, Bonner, Leonard (Porter 66mins), Jebb, Roberts (Hill 62mins), Allen, Azeez. Subs not used: Kedman, Murtagh, Dalling, Wilks.
Referee: Oliver Mackey.
Attendance: 820. 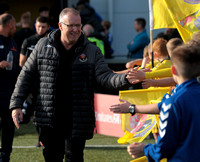 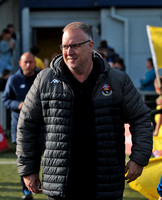 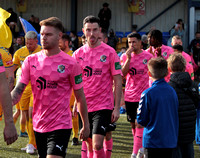 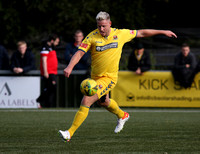 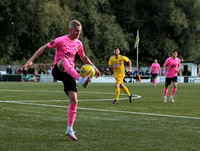 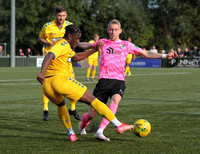