Created 13-Aug-19
75 photos
12 August 2019. 4:0 win for Chelmsford City. Whelpdale 52', Higgins 75', Giles 81' and Josh Hill (OG) 90+2'. Made worse by Jordan Wyinter sent of for a poor tackle, leaving Dartford a man down. As Co-Manager Jamie Coyle said after the game "It had looked a different story for the Darts at the break, as they dominated Chelmsford and could have easily led in the first half. The final scoreline did not reflect the game. The first half was the most we've dominated a side this season. We didn't take our chances, exactly the same as Saturday. We had some glorious chances, put some great set-pieces into the box and unfortunately didn't score the goal. It's a tough one to take. If we had scored when we were on top in the first half it would have been a completely different game but it wasn't to be and unfortunately after the sending-off we were under the cosh a little bit and they got three more goals.

Coyle had no complaints over the red card after Jordan Wynter went flying into a challenge, which left referee Callum Walchester little alternative but to reduce the Darts to 10 men. "I think he's mistimed a tackle, there's no malice in Jordan Wynter at all, and I'm just pleased that the player and him are not severely injured. it could have been a nasty one." Coyle was full of praise for teenager Cameron Brodie, who impressed in the first half against Chelmsford's experienced midfield duo of Anthony Church and Ollie Muldoon. "Cameron Brodie was outstanding," stated Coyle. "For a 17-year-old kid to come into a game of this magnitude, he didn't deserve to be on the losing side." 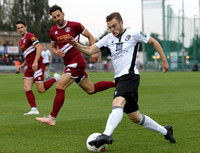 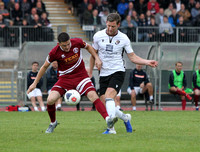 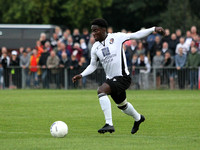 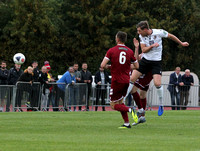 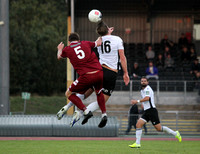 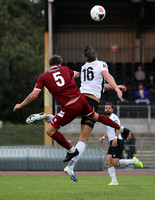