The visitors started the game sitting in twelfth place of the National League South table, having been unbeaten on their travels after six matches (winning two and drawing four). The Bluebirds’ form suggested a difficult game was in store for Steve King’s side, who hadn’t managed to find the net for three and a half matches and, despite ending the goal drought in emphatic style, the hosts were to be left frustrated by five o’clock. The challenge appeared to get more complicated during a frustrating opening forty minutes, in which the visitors took full advantage of. However, it took until the twenty-first minute for any meaningful opportunity to be created, and it was the Bluebirds who created it. The move came after Kieran Murtagh’s pass towards Luke Wanadio was a little short, leaving Ethan Hill to pounce and launch a swift counter-attack along their left-flank. Despite Wanadio’s best efforts to prevent the attack, a dangerous cross was sent in and Dan Griffiths arrived to send the ball into the back of the net to give his team the lead. Such was the nature of this game, that it took until after the half-hour mark before the hosts created anything noteworthy. First a terrific move involving Noor Husin and Jack Jebb resulted in the former threading the ball out to Jernade Meade, who delivered a peach of a ball across the box, narrowly missing Ade Azeez (32). Then Jebb tried his luck from distance two minutes later, but his dipping drive was just a little too high. The hosts suddenly exploded into life around forty minutes. As the Darts found their mojo, a swift attack resulted in Jebb sending an enticing cross into the box for Ade Azeez to head beyond goalkeeper Will Henry to pull the Darts level (41). Two minutes later saw the hosts edge in front after another good move resulted in Dan Roberts racing forward one-on-one with Henry. His shot was saved, but the ball fell to Husin, who sent a controlled shot into the back of the net and put his team 2-1 ahead at the break.

But Mike Cook’s Bluebirds are unbeaten on their travels for a reason and, despite the Darts looking rather confident during the opening exchanges of the second forty-five, they were level by the 57th minute. A Tom Bonner challenge, for which referee Ben Atkinson showed him a yellow card, resulted in a free-kick on the edge of the Dartford box. And Ricky Aguiar sent the set-piece straight into the bottom corner, of which Dan Wilks was unlucky not to save. Dartford rallied and continued to press forward, searching for the next goal, while Chippenham seemed happy to soak up the pressure and hit on the counter. Yet, it was the Darts who came closest next when Husin drove them forward before his teasing strike was blocked. The loose ball fell to Jebb, who took on the opportunity, only to see Henry respond with a good save (68). Ten minutes later saw the hosts take a deserved lead after yet another superb move instigated by the impressive Jernade Meade. His delightful ball into the Chippenham box eventually found Kieran Murtagh. The midfielder’s strike ricocheted back off the upright, and there was top-scorer Azeez, who honestly couldn’t miss to pop the ball into the goal. The Bluebirds responded instantaneously and breached the Dartford defence within seconds. As their man sprinted away, one-on-one with Wilks and looking odds-on to score, the Dartford number one rushed out to make a fantastic save (79). Then captain, Tom Bonner, stood up to make an excellent challenge seconds later to prevent another Bluebird attack.

Steve King then introduced some fresh legs to help his team get over the line. The second change was forced, as Man of The Match Luke Wanadio limped off the pitch to the applause of the home faithful to be replaced by Danny Leonard in the 86th minute. This substitution came after Josh Hill had replaced Dan Roberts (80), and was shortly followed by Ade Azeez exiting the field for Emmanuel Sonupe (88). Unfortunately, despite all their hard work on the pitch, the visitors always remained a threat and were level again as we entered the 90th minute, after Luke Russe took advantage of space in the penalty area to smash home a late equaliser. The result sees the Darts scoring again and, while the players might feel unhappy with the overall result, they’re still unbeaten at fortress Bericote Powerhouse Princes Park and still sit two points clear at the top of the National League South table, despite having played two more games than their closest challengers. 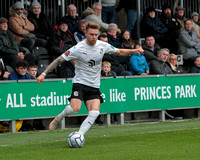 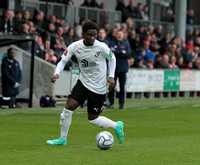 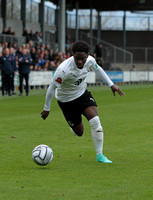 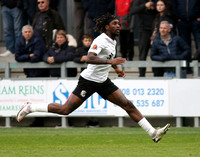 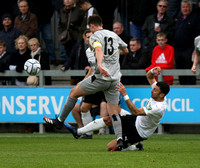