Dartford made it five league wins in a row thanks to goals from Kalvin Kalala and Marcus Dinanga against Bath on Saturday.

The Darts are back up to third in National League South as they retained their unbeaten record at Princes Park with an excellent defensive performance.

Dartford boss Steve King made a number of changes after their FA Trophy loss at Needham Market last weekend with a debut for on-loan Millwall left-back Junior Tiensa. Jake Robinson had claims for an early penalty turned down while Darts keeper Dan Wilks had to gather Jordan Dyer’s long-range shot at the second attempt in wet conditions at the other end. Bath keeper Ryan Clarke was called into action to turn behind Tyrique Hyde's drive before Robinson headed just wide of the far post from a Ody Alfa corner.

Darts, without the suspended Jack Jebb, went ahead on 18 minutes when skipper Tom Bonner did well to keep a free-kick alive in the box and he teed up Kalala, who took his time before converting from close range. Alfa called Clarke into action again before the break, although the visitors - who were neat and tidy throughout - almost levelled on the stroke of half-time when Joe Raynes turned Zak Delaney’s cross just wide of the near post.

Dartford were playing into the wind after the break and they broke with speed through Jordan Wynter seven minutes into the second half. Wynter fed Luke Allen, who beat two defenders before lacking power in his shot to trouble Clarke. Bath went close when Raynes whistled a right-foot shot wide of the upright from the edge of the box before Jordan Dyer headed wide but their forward forays lacked any real punch.

Darts introduced fresh legs in Dinanga and Danny Leonard and they were comfortably soaking up what pressure Bath could muster in the blustery conditions. Leonard provided an outlet for Dartford in the closing stages and Dinanga nearly wrapped it up with six minutes left but his left-foot drive came back off the underside of the crossbar. Dinanga had another chance when sent clean through but keeper Clarke showed all his experience with another smart stop. But he finally got on the scoresheet deep into injury time when Leonard's blistering run took him past two defenders before he was upended in the box, and Dinanga stepped up to send Clarke the wrong way from the penalty spot. 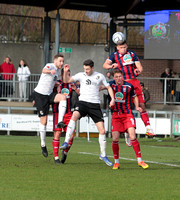 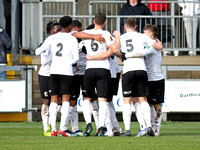 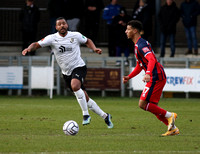