Despite the hosts looking the liveliest of the two sides during this half, they created very little meaningful opportunities. In fact, it was the Darts who came close twice in quick succession after 24 minutes via the ever-reliable Carruthers. First, his corner somehow found the top of Charlie Grainger’s crossbar, before the midfield maestro forced the goalkeeper to punch clear his curling free-kick seconds later. When the hosts did eventually get a sniff of a chance, however, the alert Connor Essam was there to pull off a "good old-fashioned crunching challenge" to prevent his side from going two goals down (38). The momentum of the game then swung towards the Darts when, on the stroke of half-time, Dulwich Hamlet’s hero became the villain. As Marvin Herschel turned and raced into the Hamlet box, Nana Owusu floored the Dartford youngster and Mr Matthew Norton pointed to the spot. Up stepped Carruthers, as cool as you like, to pull the Darts level (45).


As the second half progressed, goal-scoring opportunities proved to be in short supply. With the majority of play taking place in the middle of the pitch, the game seemed to be a little stop/start. The Darts looked to be in control and comfortable. Equally, the hosts weren’t giving anything away either, and were doubling-up with marking Marvin Herschel in an attempt to stop the youngster from exploiting his natural ability and pace. However, Herschel did get beyond his man in the 83rd minute to force a corner. Teammate Carruthers swung it into the box, and there was the leap by Charlie Sheringham to send a powerful header into the back of the net (84) just eight minutes after coming on to replace Jack Smith! 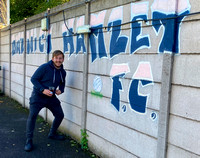 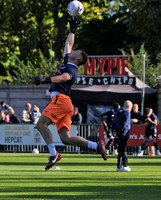 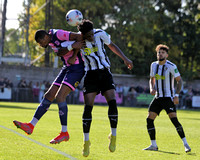 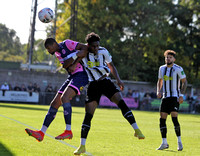 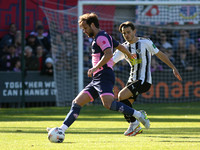